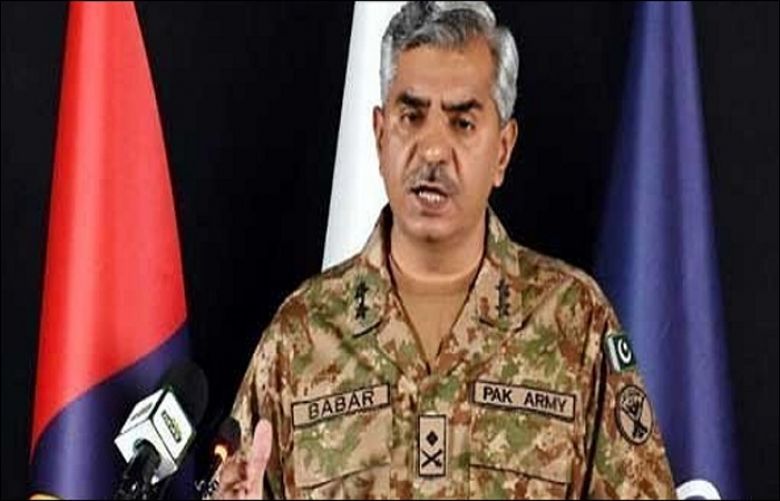 Director-General of the Inter-Services Public Relations Maj Gen Babar Iftikhar said Monday coronavirus was a danger that "we have never seen in our lifetimes" but that the Pakistan Army was fully aware of its duty and would counter the pandemic with the nation's help.

Addressing a press conference here in the city and wishing citizens on the Pakistan Resolution Day, Maj Gen Iftikhar said he wished to apprise the country's citizens of the military's efforts in the war against COVID-19, which has so far infected 882 people and left at least six people dead.

The borders had been closed as a preventive measure but "the actual border is between the man and the coronavirus, which we have yet to take control of", he said.

"This will only be possible through self-discipline and cooperation. The best defense against the coronovirus is cooperation,” he said, adding that Pakistan was facing a serious challenge and that only with the people’s belief in the state could this problem be resolved.

"Pakistan Army is well aware of its responsibility and will bring all of its resources to use,” he said, assuring the citizens that the Army was standing alongside its countrypeople.

“Yesterday [Sunday] evening, in a special corps commanders conference to deal with coronavirus, Pakistan Army’s aid to civil institutions and its plan of action was reviewed,” the military's spokesperson said.

"Despite being deployed at the Line of Control (LoC) and the western border, Chief of Army Staff (COAS) Gen Javed Qamar Bajwa has directed that all available soldiers and the Army’s medical resources be deployed to tackle the coronavirus,” he noted.

"The government of Pakistan has summoned the Pakistan Army under Article 245 in aid of civil power,” he added.

"According to the notification issued by the federal and provincial governments, only hospitals, shops selling food items, medical stores, and food and medicine manufacturing industries would only remain open, while schools shall remain closed,” he added.

Maj Gen Iftikhar stressed that the petrol pumps and markets would remain open only according to the timings issued by the respective provincial governments.

The spokesperson also mentioned that Gen Bajwa had decided to donate one month’s salary to tackle the coronavirus pandemic, while personnel between the ranks of Brig to Lt Gen would donate three days' worth of their salaries. The personnel below the Col rank and soldiers would donate two and one days' worth of their salaries, respectively, he added.

With regard to the Pakistan Day, he said the citizens — the heirs of those who fought for the country's independence — "face a new challenge, an evil that has taken over the entire world ... so much so that even the developed nations seem powerless against COVID-19".

The Army spokesperson added that there was a need for everyone to once again unite with a passion for safe Pakistan. "Today is also a day to remember our Kashmiri brothers and sisters, who, despite being helpless in the face of the worst state-sanctioned terrorism and this natural disaster, are an example of resistance in their fight for the right to self-determination," he added.

"People of the occupied Kashmir will be successful in their struggle," the army spokesperson added.