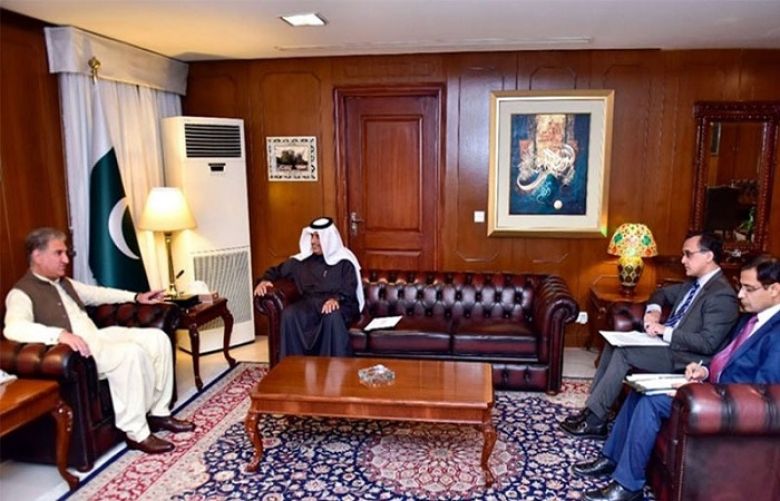 Qatar has invited Pakistan to the signing of the US-Taliban peace deal set to take place on February 29.

Last week, the US and the Taliban announced they were set to sign a historic agreement in Doha, Qatar, on Saturday, that would pave the way to ending America’s longest war.

Qureshi said Pakistan and Qatar had both played a "pivotal role" in the Afghan reconciliation process.

He welcomed the peace deal and said Pakistan had always held the view that there was no military solution to the Afghan conflict, adding that now the world was accepting this stance.

According to Radio Pakistan, Qureshi expressed confidence that the peace deal would lead to intra-Afghan dialogue.

The foreign minister had on Saturday said Pakistan played its role and "fulfilled all promises" with America after reports of the US-Taliban deal emerged.

Qureshi went on to say now it was the responsibility of the Afghan government to take the peace process forward.

He said Pakistan wanted to see the formation of an inclusive delegation for advancing towards intra-Afghan dialogue.

"My experience shows that the people of Afghanistan want peace. It is now up to their elite whether they take forward the peace efforts or waste it by indulging in power games. All responsibility will be on them [the Afghan government] and not on Pakistan," the foreign minister had said.

The US and the Taliban are set to sign a historic agreement that would pave the way to ending Ame­rica’s longest war, the bitter foes announced on Fri­day, hours after Kabul said a week-long partial truce across Afghanistan would kick off over the weekend.

If the so-called "reduction in violence" holds, it would mark a major turning point in the gruelling conflict and set the conditions for a deal that could, ultimately, pull US troops out after more than 18 years and launch Afghanistan into an uncertain future.

Both US Secretary of State Mike Pompeo and the Taliban issued statements saying they had agreed to sign the accord on Feb 29 in Doha, following the one-week partial truce.

“Upon a successful implementation of this understanding, signing of the US-Taliban agreement is expected to move forward,” Pompeo said, adding that negotiations between the Taliban and the Afghan government would “start soon thereafter”.