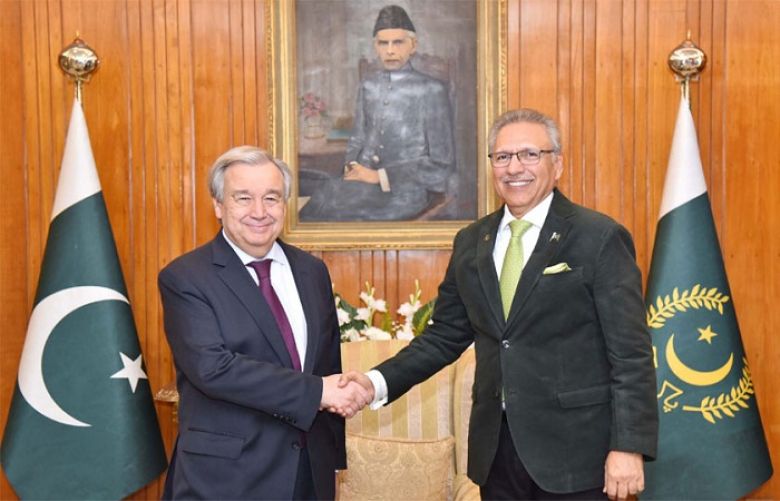 President Dr. Arif Avli on Monday urged the world leaders to play their due role against Islamophobia across the globe also underlined the fundamental obligation of United Nations to implement the relevant Security Council resolutions on Jammu and Kashmir, pledging the right to self-determination to the Kashmiris.

The president was talking to UN Secretary General Antonio Guterres in Islamabad.

The president shared concerns over India’s illegal and unilateral actions in Occupied Kashmir, the grave human rights situation there, and the threat posed to regional peace by India’s belligerent rhetoric and aggressive measures.

Dr Arif Alvi highlighted the immense contributions made by Pakistan over the 40 years in hosting Afghan refugees and providing them economic and political security.

The Secretary General appreciated Pakistan’s contribution while hosting Afghan refugees for four decades. He said the generosity and hospitality shown by Pakistan towards the Afghan refugees is a remarkable story of solidarity.

Meanwhile, speaking at a dinner hosted in honour of UN Secretary General Antonio Guterres in Islamabad, Dr Arif Alvi said India has put itself into a quagmire after introduction of controversial citizenship law.

He said UN Military Observer Group should be allowed to report on what is happening on the borders, besides India should open up the occupied territory, and allow the people and media to visit the held valley.

He urged the global community to exert pressure on India to realize seriousness of situation.

He said the Pakistani nation and its leadership not only talk about the peace but also want it. On the other hand in the neighbouring country, the political leadership, its people and the media have been creating a hype over war.

In his address UN Secretary General said contrary to the global situation in which the borders have been closed and refugees were turned back, he always found Pakistan opening its borders and welcoming the refugees on its soil.

He urged the international community to come forward and make the Afghan peace process a success and lend support in the reconstruction efforts as the Afghan people required it and the world needed it.

About the Occupied Kashmir, he reiterated that the UN has called for implementation of its Security Council resolutions on the issue and he also offered his good offices for its peaceful resolution.

He said the UN's stance has been consistent that the fundamental rights of Kashmiri people should be protected.