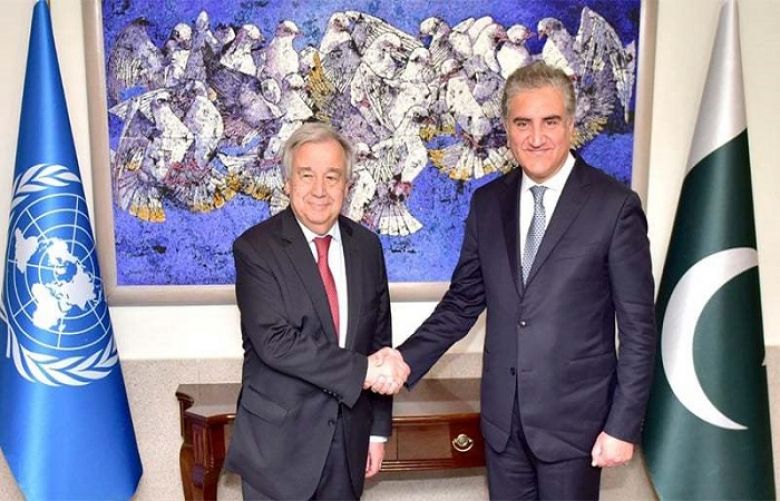 Guterres on the occasion expressed great joy on being in Pakistan again, he told that he had been to the country several times in the past but not as the UN Chief.

In his address, Guterres said that it was now high time that the world gets to see the positive image of Pakistan, he said that the main objective of his current visit is to highlight the true and vibrant image of the country to the world.

Lauding Pakistan’s efforts being the second biggest refugee sanctuary in the world, the UN Chief said that Pakistan has embraced refugees from across the world and has proven to be a great partner to the United Nations, he thanked Pakistan for all the efforts it puts forth in the fight for peace and justice.

He added that Pakistan’s magnanimous effort of providing a safe haven to Afghan refugees was an admirable feat, one that can’t be appreciated enough.

Airing his concerns on the friction between neighboring countries India and Pakistan, the UN Chief said that he has serious concerns over the current ongoings between the country, he stressed that the only way forward in the conundrum is dialogue.

The UN Chief also added that both countries should show restraint at the working boundaries and ensure that the strife does not escalate into something regrettable.

Answering a question with regards to rising Islamophobia in the world, Guetteres answered that the notion of someone being an Islamophobe and the general idea of Islamophobia both were detrimental to peace and reconciliation efforts among countries and meddled with interfaith harmony among individuals.

The UN Chief said that a concerted effort was required to tackle Islamophobia and defeat it for good.

Speaking on the occasion, Foreign Minister Shah Mehmood Qureshi said that he and the UN Chief had a very important and fruitful meeting on the matter of Kashmir, a land which has illegally been annexed and is being kept under occupation with a presence of 0.9 million armed personnel.

Qureshi said that the United Nations must ensure resolutions passed by the global body pertaining to Kashmir are adhered to and implemented.

Speaking on Pakistan’s role in the Afghan Peace Process, FM Qureshi said that Pakistan holds an integral responsibility in the process and will stand by it till the matter reached its amicable end.

During his four-day stay, the UN Secretary-General will call on the President and the Prime Minister.

The conference is being held in collaboration with the UN High Commission for Refugees (UNHCR). The delegations from Afghanistan and Iran will also attend the Afghan refugees’ conference.

Earlier in the day, The UN secretary-general met with the refugees from Afghanistan, Yemen, and Tajikistan during an event in Islamabad. The refugees shared their experience in the education, business and skill development sectors with the UN chief during their meetings with the dignitary.

Speaking on the occasion, António Guterres said that Pakistan is a hospitable country and had especially hosted the Afghan refugees for a longer period. “I am thankful to Pakistan for their hospitality,” he said.

United Nation Secretary-General Antonio Guterres also has reiterated his call for the Kashmir dispute to be resolved through dialogue while addressing a conference about climate change in Islamabad this afternoon, he advised both countries to engage in meaningful dialogues for the peaceful resolution of Kashmir dispute.