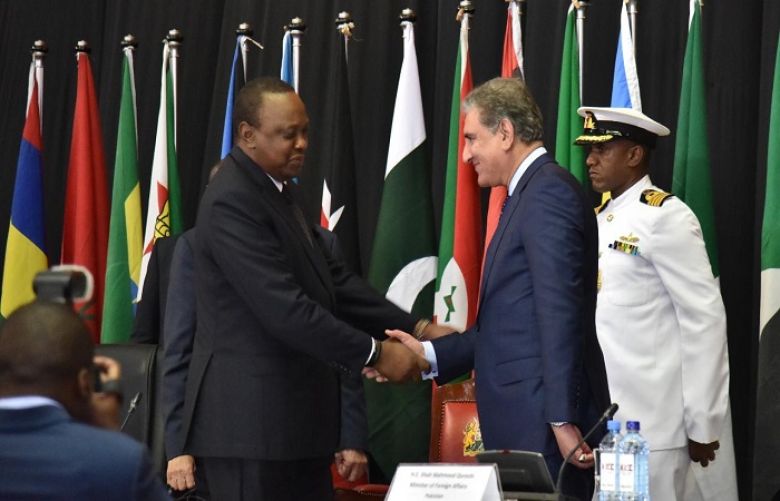 Addressing the inaugural session of Pakistan-Africa Trade Development Conference in Nairobi, he said with resolute action, we have turned the tide against the scourge of terrorism and transformative structural reforms are turning challenges into opportunities.

The Foreign Minister said Pakistan is known to possess 92 minerals, of which 52 are commercially exploited.

The Foreign Minister said Pakistan's economy has stabilized, and is on path for sustained growth, over a longer trajectory.

Meanwhile, Pakistan and Kenya have signed a Memorandum of Understanding for extending cooperation in training of diplomats.

It will give diplomats from Pakistan and Kenya a chance to benefit from each other's experiences regarding advanced practical training.

Many diplomats from the African countries have already received practical training from the Foreign Service Academy of Pakistan.

The two foreign ministers described the signing of MoU as an important step towards further promotion of bilateral ties.

Meanwhile, in an one-on-one meeting with his Kenyan counterpart Raychelle Omamo in Nairobi, Foreign Minister Shah Mahmood Qureshi said Pakistan values its relations with African countries including Kenya, which is the gateway to eastern Africa.

The Foreign Minister briefed his Kenyan counterpart about the salient features of Pakistan's "Engage Africa" vision.

He said that after China, Kenya is the biggest market for Pakistani products.

The Foreign Minister said holding of Trade Conference in Nairobi is reflective of Kenya's importance for Pakistan in particular and that of Africa in general.

He said Pakistan is desirous of joining the African Union. He expressed the hope that Kenya will extend its support in this regard.

Shah Mahmood Qureshi apprised his Kenyan counterpart regarding the grave human rights violations in Occupied Kashmir by Indian forces and urged Kenya to raise its voice in getting the armless Kashmiris rid of Indian atrocities.