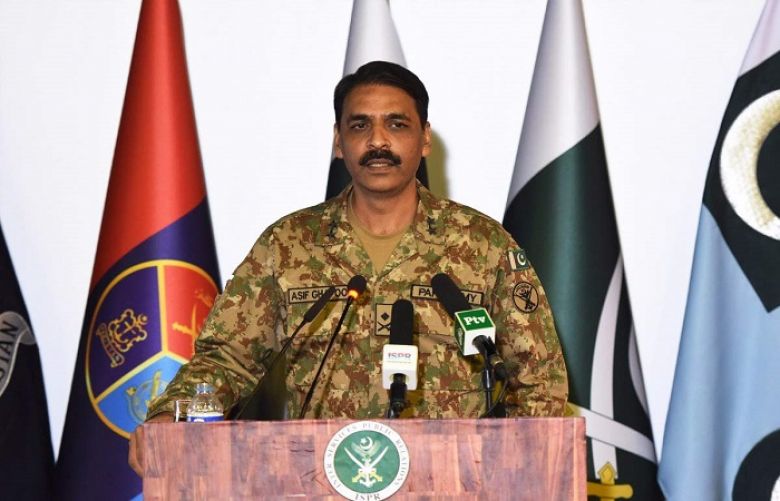 DG ISPR Major General Asif Ghafoor said on Thursday that he considered it an honour if Indians were happy over his transfer from the post of DG ISPR.

The military spokesperson was speaking to defence reports when he dismissed Indian Prime Minister Modi's recent remarks against Pakistan.

"Indian leadership says it will destroy Pakistan in 7-10 days," he said. "I want to tell them that Pakistan Army will always continue to give you [Indians] their surprises."

The DG ISPR said that no power on earth could defeat a united nation. He said the Indian army couldn't defeat 800,000 people of occupied Kashmir.

"How will you defeat Pakistan, a nation of 210 million people?" he asked.

The DG ISPR warned India against conducting any misadventure, saying that Pakistan will give an effective response in case of an "imposed war".

"I said it before, 'You will start the war but we will end it'," he said. Maj Gen Asif Ghafoor said Pakistan's civil and military leadership wanted to bring about durable peace in the region.

"The Indian civil and military leadership should also think about peace in the region," he said, calling on the Indian armed forces to halt atrocities in occupied Kashmir.

"The army chief took difficult and important decisions to maintain peace in the country," he said, crediting Gen Bajwa with playing an important role in bringing about religious tolerance and madressah reforms.

He said that Pakistan was proud of its intelligence agencies and paid tribute to the spy agency for maintaining peace in the country and thwarting terrorism.

Maj Gen Asif Ghafoor spoke about the role of the DG ISPR, saying that he could not deviate from the military's policy.

"A military spokesperson can't say anything against the institute's policy," he said. "As a spokesperson, nothing you say is your personal opinion."

Maj Gen Asif Ghafoor said that the new DG ISPR will assume charge from February 1. He thanked defence reporters, media and Pakistanis who extended their support to the armed forces on social media.

Maj Gen Ghafoor’s services were transferred to the 40th Infantry Division (Okara), where he will serve as the general officer commanding (GOC).