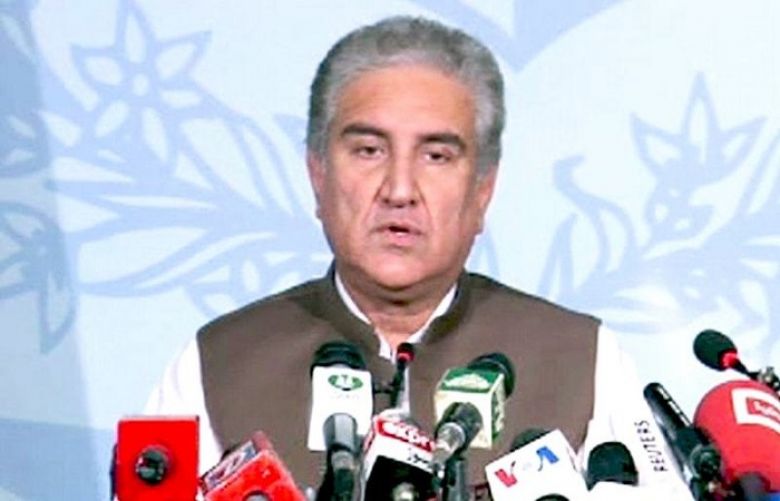 Prime Minister Imran has decided to start a new campaign that will highlight the issue of occupied Kashmir so that ground realities of the Indian-held territory are shown to the world, said Foreign Minister Shah Mahmood Qureshi on Thursday.

The foreign minister was holding a press conference during which he announced that PM Imran had decided to kickstart a new campaign to denounce Indian aggression in occupied Kashmir.

India and Pakistan have been at loggerheads ever since New Delhi decided to illegally annex the occupied territory by scrapping Article 370 of the Indian constitution which recognised the valley as a special territory.

FM Qureshi said every fundamental right was being denied to the masses in occupied Kashmir and that Indian policies were reflective of its growing "unilateralism" on the issue of occupied Kashmir.

The foreign minister is addressing a press conference with federal minister Murad Saeed and the prime minister's adviser Firdous Ashiq Awan. Qureshi said that as per the Simla Agreement, India and Pakistan were supposed to hold bilateral talks on Kashmir.

"However, as you have seen, their focus is more towards unilateralism than bilateral talks," he said. "India's recent steps and the one taken on August 5 reflects their [India's] unilateralism," he added.

FM Qureshi said that Pakistan was successful in its efforts to highlight the issue of occupied Kashmir at the UN Security Council despite Indian efforts to ensure otherwise.

"Two briefings on the Kashmir issue were held [at the Security Council] and their summary was that whatever Pakistan was saying [about Indian atrocities] carries weight," he said.

The foreign minister said PM Imran had told President Trump during their meeting at Davos about the adverse effects of a confrontation between two nuclear powers. He said the prime minister had informed the US president about the "complexities" of the Kashmir issue and urged Trump and the UN to intervene for a solution.

"The prime minister was very clear, he did not mince any words," he said, referring to PM Imran's meeting with Trump in which the two global leaders discussed the Kashmir issue. "PM Imran informed him about the dangers that the world faced if two nuclear powers confronted each other."