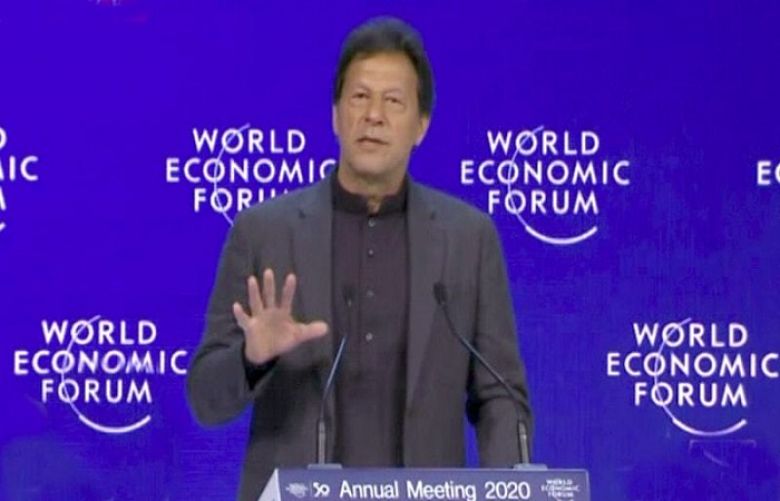 The premier began his speech by talking about his government's tree plantation campaign, which he said was expanded across the country after seeing its success in Khyber Pakhtunkhwa.

He said the government aims to plant 10 billion trees in the next four years to deal with the consequences of climate change.

Prime Minister Imran said forestation was crucial because not only is Pakistan vulnerable to global warming but because pollution has become a "silent killer" in cities across the country.

Recounting how militancy took root in Pakistan since the Soviet invasion of Afghanistan, the premier said: "You cannot make your economy grow unless and until there is peace and stability."

He said his government had decided upon coming into power that, "From now onwards Pakistan will only partner another country in peace. We will not become part of any other conflict."

To further that policy, he said Pakistan has tried to ease tensions between Iran and Saudi Arabia as well as Iran and the United States. In addition "it is the nearest we are to some sort of a peaceful solution in Afghanistan", the prime minister said.

Recalling that his government had inherited the "worst economic crisis" in the country's history, Prime Minister Imran said he has never had to face the kind of "public attitude" that he encountered in the last one year due to the tough economic decisions taken by the government.

"People are hurting. We have gone through this very tough period," he said, adding that the economy has now been stabilised. "This year we are looking towards economic growth."

He said Pakistan's top advantage is its youthful population but regretted that "we have neglected this young population because we did not concentrate on skill development [and] equipping them to become entrepreneurs." He noted that the government has now launched a programme for skills development and made funds available for startups.

Another advantage that Pakistan has is its "untapped" mineral wealth, Prime Minister Imran said, adding that the government's attention is now on developing these resources.

Talking about Pakistan's strategic location, the premier highlighted the trade potential among the regional countries. "The moment Pakistan and India's relationship becomes normal and trade starts between the two countries", immense opportunities for growth will emerge, he said.

Prime Minister Imran earlier on Wednesday said that although Pakistan and India are currently not close to engaging in an all-out conflict, international powers including the United Nations and United States "must act" to prevent tensions between the two nuclear-armed countries from reaching a point of no return.

Speaking during an interview with the International Media Council on the sidelines of the World Economic Forum annual meeting in Davos, Switzerland, the premier said he fears that India might attempt to raise tensions at the border in order to divert attention from domestic protests against two government measures that have been criticised as anti-Muslim.

"You cannot have two nuclear-armed countries even contemplating a conflict," he said, adding that it for this reason that the UN and US must take steps. He also demanded that UN observers be allowed along the Line of Control.

The prime minister recalled that he "came across a brick wall" when he reached out to Indian Prime Minister Narendra Modi after assuming office in 2018, and the relationship deteriorated with India sending fighters jets into Pakistani territory in retaliation for the Pulwama attack in occupied Kashmir.

But "things went from bad to worse" when New Delhi unilaterally annexed occupied Kashmir in August last year, he said, terming the existing state of affairs in India a "disaster" for the people of India and occupied Kashmir.

"I just think that the path which India is going [on] is a disaster for India."

Answering a question, Prime Minister Imran said the close relationship between India and the US was "understandable" because of the former being a huge market for the latter. But he said his main concern is the "direction" in which India is going and that the sequence of events taking place in India bears "striking resemblance" to Nazi Germany.