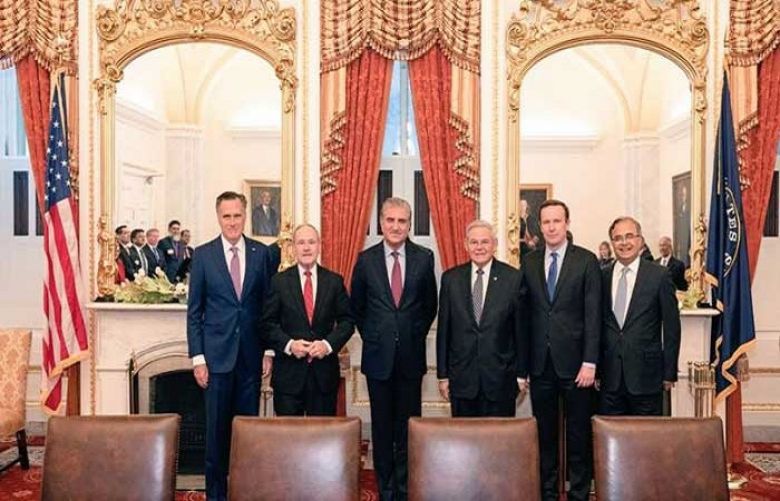 Foreign Minister Shah Mehmood Qureshi on Thursday met with United States (US) lawmakers at Capitol Hill in Washington DC as a part of his diplomatic trip to the US.

The foreign minister in his meeting with the US Senate leadership discussed US-Pakistan relationship, the situation in South Asia, the Afghan peace process, and recent developments in the Middle East.

The foreign minister also briefed the senators on India’s ongoing lockdown in occupied Kashmir, and “its implications for regional security”.

“Peace and stability in South Asia would remain elusive until the Kashmir dispute was resolved in accordance with international law and the wishes of the Kashmiri people,” Qureshi informed the senators, according to a Foreign Office press release.

The senators also lauded Pakistan’s role in the Afghan peace process and requested Islamabad for its continued support. The foreign minister assured the senators that Pakistan was committed to the Afghan political reconciliation process.

Qureshi noted that the history of Pakistan-US relationship was testimony to the value of working together. He reaffirmed Pakistan’s resolve to continue to play a constructive role and to work with the United States to bring peace in the region.

“Pakistan is for peace and we would do whatever we can to promote and facilitate peace,” said Qureshi while referring to Pakistan’s role in defusing tensions in the Middle East.

The Foreign Office said that the senators agreed with Qureshi on the need for continued cooperation between the two countries. They believe that cooperation was needed to achieve each other’s common objectives on the bilateral and regional fronts.

The foreign minister also held separate meetings with members of the Senate Foreign Relations Committee and the Pakistan Caucus of the US Congress.

In a separate meeting with the US Congress’s Pakistan Caucus the minister emphasised that Islamabad values its relationship with Washington.

The minister also lauded the caucus for its role in “further improving bilateral relations between Pakistan and the United States”. He added that the relationship was on an “upward positive trajectory” since the last year.

“The foreign minister also briefed the caucus about government of Pakistan’s vision for socio-economic progress and human development in the country as well as Pakistan’s efforts for regional peace and prosperity including in facilitating peace in Afghanistan and defeating terrorism in the region,” Foreign Office said.

Qureshi underscored the significance of further strengthening people-to-people and inter-parliamentary linkages between the two countries and urged the lawmakers to play their role.

The foreign minister also briefed the lawmakers on the latest situation in Indian occupied Kashmir and the continuing repression of the Kashmiri people by the Narendra Modi-led government.

The Pakistan Caucus thanked Qureshi for his briefing and appreciated Pakistan’s invaluable contributions for regional peace and security.

“They also recognised the role of the Pakistani American community in the US which were contributing towards further strengthening bilateral linkages and relations,” said the Foreign Office.

Qureshi’s visit to United States came amid heightened tensions between Washington and Tehran after the former killed Iranian commander Qassem Soleimani in a drone strike in Baghdad. Iran retaliated by targeting a US troops base in Iraq.

Earlier, Qureshi had visited Iran and Saudi Arabia, where he met the two countries' leaders in an effort to ease tensions in the region after a US airstrike killed Soleimani.