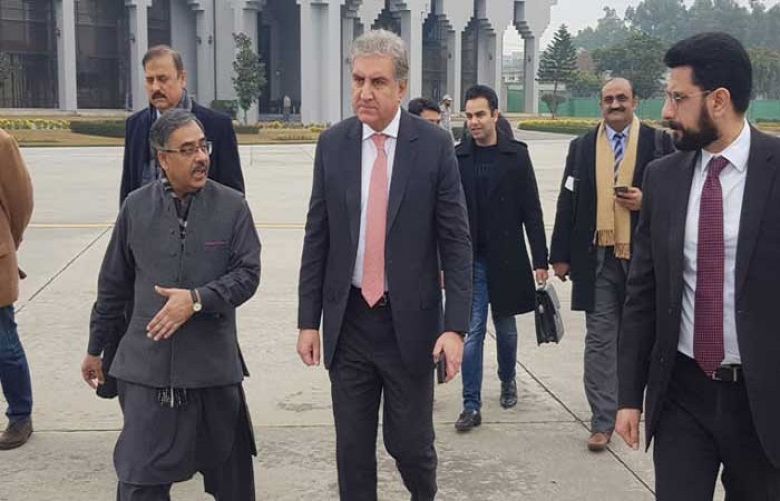 Foreign Minister Shah Mehmood Qureshi arrived in Tehran Sunday to help play a role in diffusing tensions in the Middle East following threats of a military confrontation between Iran and the United States.

The foreign minister arrived first at Mashhad and paid a visit to Imam Raza after which he went to Tehran.

Qureshi’s visit comes amid heightened tensions between Tehran and Washington after the latter assassinated top Iranian general Qasem Soleimani in an airstrike on January 3 and the subsequent missile attacks by Iran on US bases in Iraq.

The foreign minister will then travel to Riyadh where he will hold talks with Saudi Foreign Minister Prince Faisal bin Farhan Al Saud and consult on the issues of regional peace and stability.

During his visits, Qureshi will share Pakistan's perspective on the current situation by stressing the imperative of avoiding any conflict.

The foreign minister will convey Pakistan's readiness to support all efforts that facilitate the resolution of differences and disputes through political and diplomatic means.

FM Qureshi will then travel to Washington on Jan 15 where he will meet senior officials of Donald Trump administration to discuss the Middle East crisis.

On Saturday, Qureshi in a statement said that Iran owning up to its mistake of downing Ukrainian passenger plane would likely ease up tensions in the region.

“Iran’s confession of downing Ukrainian passenger plane should ease up tensions as the region can neither endure tension nor can it tolerate war anymore,” he said.

FM Qureshi reiterated that Pakistan would play an active role to reduce growing tensions in the region.

Iranian armed forces on Saturday admitted that they unintentionally shot down the Ukrainian airliner that crashed this week and blamed "human error" for the mistake.