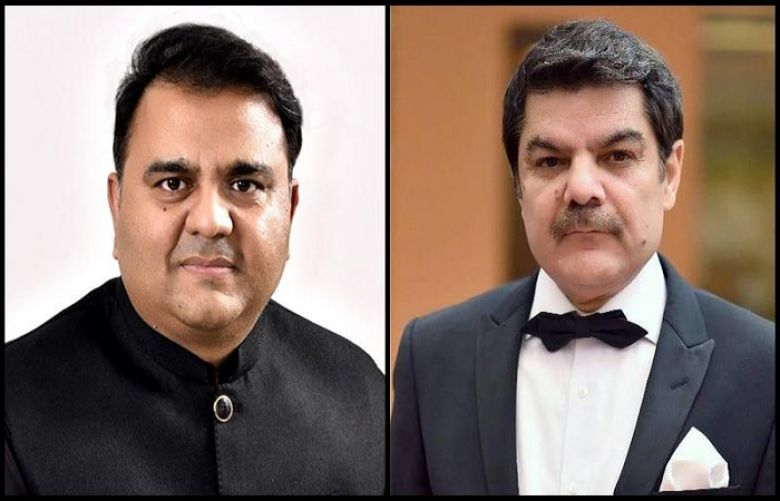 Science and Technology Minister Fawad Chaudhry on Sunday questioned Mubashir Lucman’s journalistic credentials amid reports that he had slapped the outspoken TV anchor at a wedding ceremony.

In one of his shows on a private TV channel, Lucman had invited another anchorperson who salaciously linked Chaudhry to social media personality, Hareem Shah.

The federal minister had reportedly taken exception to the allegation and, according to sources close to the matter, confronted and slapped Lucman at the wedding of provincial minister Mohsin Leghari’s son. Senior leaders of the ruling Pakistan Tehreek-e-Insaf (PTI), Jahangir Tarin and Ishaq Khakwani, were also purportedly present at the time.

The entangled pair were separated by other guests at the wedding.

Chaudhry all but confirmed the incident when he retweeted the news story accompanied by some choice remarks for Lucman. He wrote: "People like Mubashir Lucman have nothing to do with journalism … they are [sexual slur] who have barged into journalism.

"It is everyone’s duty to expose [such people]," he tweeted.

It is pertinent to mention here that Chaudhry had also slapped another TV anchor named Sami Ibrahim in June 2019. He had also used slurs against Ibrahim in a subsequent statement.

His outburst had come over Ibrahim’s allegation that some from within the ruling party — of which Chaudhry is a part — were conspiring against Prime Minster Imran Khan’s government and the Pakistan Army.