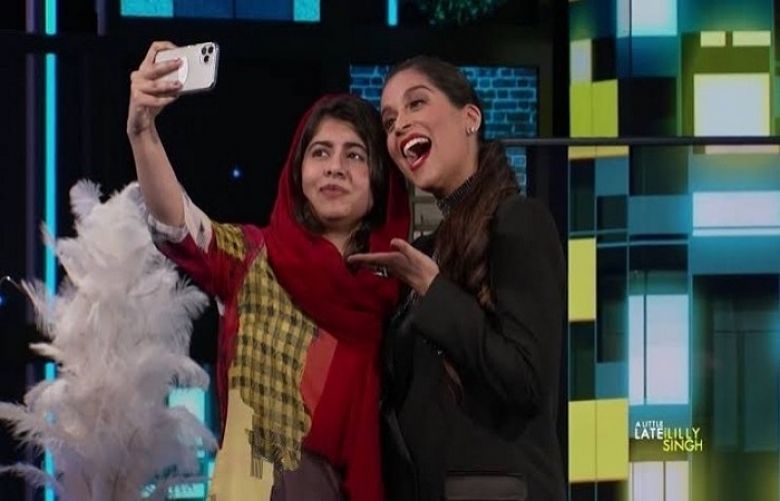 Malala has been busy with her studies but after a long time, she chose to make a TV appearance.

The young activist was a guest on Late Night with Lily Singh on Wednesday where she talked about her charity organisation Malala Fund, her digital platform Assembly and also about her personal life.

The most precious moment however, was when she revealed why she doesn't have any selfies on her Instagram, saying, "I don’t have a friend who can be there with me to take a selfie"

I’m on @latewithlilly tonight! Tune in to hear us talk about college life, @malalafund and rap lyrics. Plus I take my #firstinstaselfie with @Lilly and do a practice job interview.

Lily was quick to help Malala out!

Malala also had an adorable response when asked about her family's reaction to her Nobel prize.

"Parents always get excited, for them it was such a big day but my little brother was like, 'Look, you’ve won the Noble Peace Prize but it doesn’t mean you can be a bossy sister."

She added, "For them it was like not much has changed, even when they come to university and see my room they are like why haven’t you cleaned up, when did you last change your bed sheets, why aren’t your clothes in the wardrobe, did you not wash your dishes, all these sort of things."

For fun, Lily decided to teach Malala how to give a job interview and we love that she has a good sense of humour and isn't afraid to flex
When asked about her New Year's resolution, she said, "It’s not just a New Year's resolution but also the start of a new decade and this last year has been all about young activism so for the new decade, I want to keep fighting for girls education; there are 130 million girls out of school and I hope we can achieve more. So I wish we can get more girls to go to school in the next decade."

Malala Fund has been active in not only raising awareness about girls' education but also has been doing its best to make it happen. It supports the education of young girls from not just Pakistan but many countries who wouldn't have access to it otherwise, such Afghanistan, Iraq, Nigeria, Ethiopa and many more
About her digital platform, she explained, "Through Assembly, Malala Fund is sharing stories of girls over 90 countries in different languages. It’s a platform for girls and by girls where they can share their voice and you can listen and share their stories and raise awareness in your community and talk to people. Whatever step you take, it actually matters so I really encourage you all to do something for girls’ education."

Malala sees the power and potential in young girls raising their voice as she speaks on Greta Thurnberg, saying, "I think it’s amazing to see young girls taking the leadership for these social changed and I love it."

"I always used to say when I was 11 and I was fighting for my right to education I used to think I have to grow up to change the world but I realized you don’t need to grow up to make a change. You can do it right now."