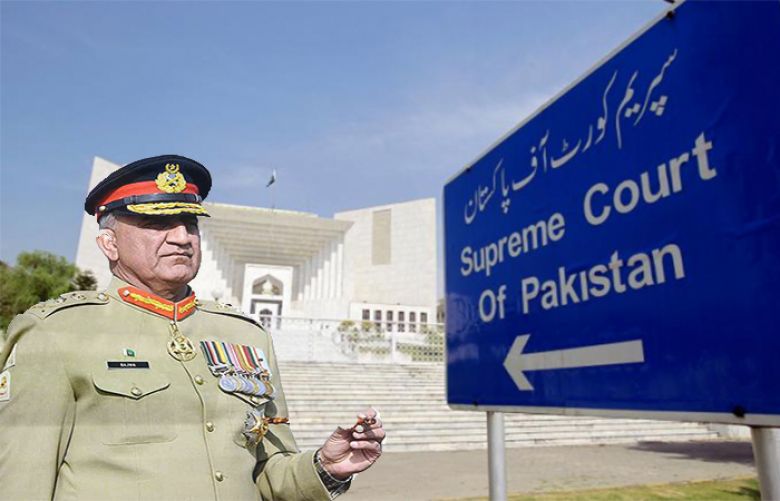 The Supreme Court on Thursday allowed the federal government to grant a six-month extension to COAS General Qamar Javed Bajwa.

In its short order the apex court directed the government to bring necessary legislation within six months' time.

The order, read out by Chief Justice Asif Saeed Khosa, ordered the parliament to introduce legislation for appointment of army chief under Article 243.

The CJP remarked that the court is observing judicial restraint and leaving the matter to the parliament.

We have reviewed several laws including Army Act 1952 and Rule 1954, the chief judge said.

The court had earlier reserved its verdict in this high-profile case and directed the federal government to furnish a fresh summary of the army chief's extension of services.

The court requires that the summary — the fourth of its kind — to:

not mention the Supreme Court

exclude the mention of a three-year tenure of extension

not include details regarding the army chief’s salary and incentives

Furthermore, the apex court also sought an undertaking from the government that it would legislate on the matter within six months.

In its written verdict, the court mentioned some pertinent points, with the fifth point describing the need for legislation.

"Considering that the COAS is responsible for the command, discipline, training, administration, organization and preparedness for war of the Army and is the Chief Executive in General Headquarters, we, while exercising judicial restraint, find it appropriate to leave the matter to the Parliament and the Federal Government to clearly specify the terms and conditions of service of the COAS through an Act of Parliament and to clarify the scope of Article 243 of the Constitution in this regard.

Therefore, the current appointment of General Qamar Javed Bajwa as COAS shall be subject to the said legislation and shall continue for a period of six months from today, whereafter the new legislation shall determine his tenure and other terms and conditions of service."

When the hearing resumed, the chief justice asked the Attorney General Anwar Mansoor Khan to present the notifications of extension granted to former army chief general (retd) Ashfaq Pervez Kayani, as well as the notification of the retirement of General Raheel Sharif.

The attorney general informed the court that General Qamar Bajwa has been reappointed under Article 243, to which the CJP remarked that you have to convince us this is legal.

After arguments made by the attorney general and General Bajwa's counsel Farogh Naseem, the bench stated that a 10-member full court will announce the short order in the afternoon, whereas the detailed verdict would be issued in the evening.

In the meantime, the court granted General Bajwa permission to continue working, conditionally. It further instructed the government to prepare a fresh notification, which does not list the tenure of the extension and to submit it in the court at 1pm.

The CJP observed that propaganda was launched against the judges as they took up the matter. “It was said that the three judges are CIA agents and are working on Indian agenda.”

On this, the attorney general said that the matter was discussed in India. Justice Khosa rued that a constitutional office was being made controversial, stressing that "it is our right to ask questions."

Last night, the federal government, aided by the military’s counsel, drafted a new summary removing all the legal lacunae pointed out by the apex court earlier in the day.

For the first time, the paperwork was completed with the assistance of Judge Advocate General (JAG) Branch of the GHQ, according to The News.

Those privy to the developments told the publication that input from the JAG Branch was sought by the relevant ministry after the SC highlighted serious errors in the drafts presented in the court.

The fresh summary was inked by midnight, and has replaced the words “re-appointment” with “extension in service”. Once finalised, the summary was sent to the federal cabinet through a circulation process late on Wednesday night and then submitted to the president, who issued the requisite notification.

The meeting of the stalwarts of the government and the relevant ministry was chaired by Prime Minister Imran Khan, where all developments were discussed thoroughly and the meeting was also attended by the COAS on the invitation of the premier.

The attorney general, former law minister Naseem, federal law secretary and other senior officials were also in attendance. Those present also expressed their displeasure over the difference between the summary and the notification submitted earlier in the day before the Supreme Court.

Should the government fail to convince the court for the third time in three days, a so-called Plan-B would be pressed into action. The plan would include promulgation of a presidential ordinance to facilitate the extension, to prevent any chaotic outcome.

The Supreme Court on Wednesday said that the court will consider three points, on the issue of granting a three-year extension in service to General Bajwa: the law, the procedure involved, and the grounds for granting an extension.