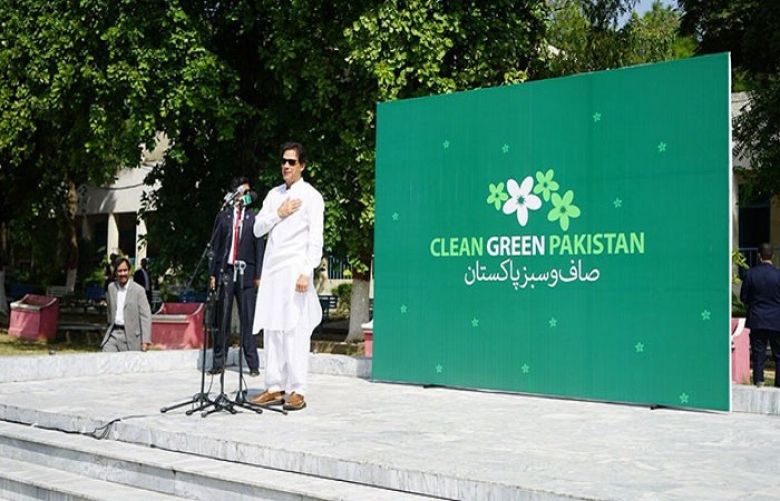 Prime Minister Imran Khan has reaffirmed the government's commitment to make Pakistan clean and green with the support of masses.

He was addressing a ceremony in connection with the launch of Clean Green Pakistan Index in Islamabad on Monday.

It aims at improving overall green and clean outlook of the Pakistani cities by kicking off competition amongst them on various indicators.

Imran Khan said every segment of the society including the administration, the elected representatives and the youth should become part of the clean and green initiative to fight environmental degradation and protect the future of this country.

He said it was due to the participation of the people that we planted one billion trees in Khyber Pakhtunkhwa over a period of five years. Now we will make the entire country green with particular focus on the cities where specific areas will be identified for plantation.

The Prime Minister said the government will gradually increase funds for this campaign.

Imran Khan said that an efficient local bodies system is also being introduced in Punjab and Khyber Pakhtunkhwa provinces. This system envisages empowerment of the people at the grassroots level. He said the elected representatives at the village level will also be made part of the regional level competitions on environmental indicators.

Describing the pollution as the silent killer, the Prime Minister regretted that Lahore has become the second or third most polluted cities in the world as no effort was made in the past to protect its environment. He said the last ten years saw the city losing seventy percent of its green cover.

Imran Khan said this country is blessed with immense resources including twelve climatic zones, fertile land and natural resources. He said we need to value these resources in order to help the country stand on its own feet. He said given the immense beauty of the country, it will be made a destination for tourism.

Addressing the ceremony, Adviser to Prime Minister on Climate Change Malik Amin Aslam said the government is committed to make Pakistan a clean and green country.

He said in the first phase of this drive, healthy cleanliness competition will be conducted in 19 cities. He said students from schools and universities are being engaged in the drive. He urged general public to make this drive success.

The Adviser said the youth of country should register and participate in this drive and the government will recognize and reward those who actively participate.

He said electric vehicles will be introduced to reduce environmental pollution in the country.

The Adviser said the government is planning to prevent the water wastage as thousands of gallons of clean water are being wasted in the sea due to lack of policies in utilizing water resources.