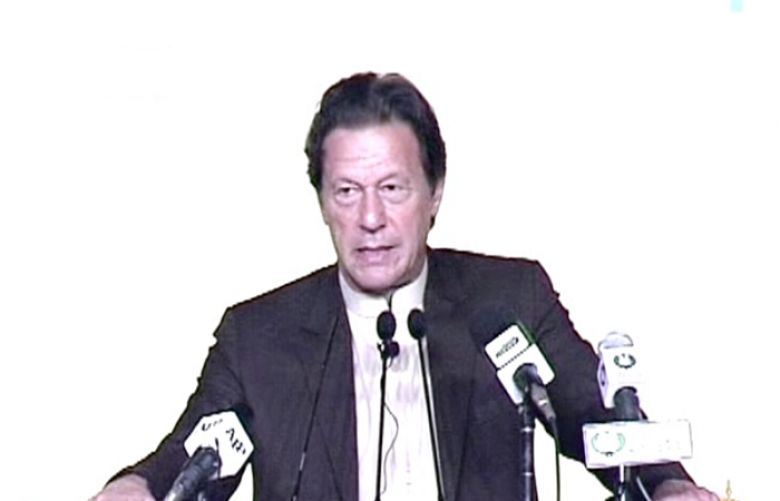 In a reference to former prime minister Nawaz Sharif's treatment abroad, Prime Minister Imran Khan said on Friday that just by seeing the way Nawaz climbed the stairs of the plane, made his illness appear dubious.

The prime minister made those remarks while putting the foundation stone for a hospital in Mianwali — his political constituency. At the occasion, he said that his objective is not to "save seat" but to bring about a real change.

While, talking about his arch-rival Nawaz Sharif, the PM said that when he saw the former premier climbing the stairs of the plane he remembered the doctors’ reports.

The prime minister said that in the reports it was written that "the patient had heart problems, kidney problems, high sugar and if the patient is not allowed to go abroad then he will be 'gone' [forever]."

PM Imran wondered if Sharif's recovery is due to the luxurious plane he travelled in or to the London climate. He said that he seeks clarity on the issue and that the matter needs to be investigated.

"After seeing him climb the stairs of the airplane, I once again looked at the medical reports," he said. "The reports said that his heart was also in a bad condition, his kidneys were also not well and he had diabetes. I said to myself 'God is great'," he added.

The prime minister taunted Nawaz again by saying that maybe the PML-N chief had recovered by simply looking at the plane.

"Maybe he looked at the plane and got healed since it was such a magnificent plane," he said. "A common man cannot travel in such an aircraft."

"Hasan Nawaz lives in a house worth Rs8 billion in London," he said. "Where did that money come from?"

He said that Dar's father owned a bicycle shop but his son had become a billionaire.

"Musharraf gave the Sharifs an NRO," he said. "I am not here to save my seat. If I give these people an NRO, the country will have no future."

Prime Minister Imran said that when he was called to court about his property, he gave 60 documents in 10 months' time.

The premier, apart from the political discourse, also touched upon the quality of healthcare in the region.

He recalled that when he had started his politics 23 years ago he realised that there were no doctors or hospitals in Mianwali.

"I will solve issues relating to healthcare in Mianwali," he said. "Then we will solve the problem of water and education."