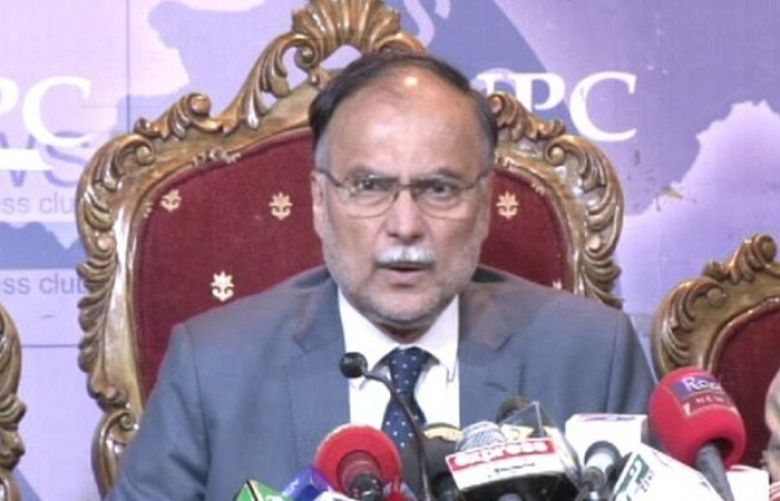 PML-N Secretary General Ahsan Iqbal on Thursday challenged Prime Minister Imran Khan to reveal "who funded the Pakistan Tehreek-i-Insaf (PTI) from within India, the Middle East and the United States".

Addressing a press conference in Islamabad, the PML-N leader asked why the prime minister was allegedly not disclosing the money trail of PTI's foreign funding.

"Now the time has come when the nation is asking for receipts," he said, alleging that the ruling PTI concealed 23 party accounts from the Election Commission of Pakistan (ECP) and the public.

He alleged that millions of dollars were transacted through these unreported accounts.

Innocent overseas Pakistanis were tricked into donating funds for the party while painting a fake and bleak picture of the state of affairs in Pakistan, Iqbal alleged, adding that these donations were not disclosed anywhere and plundered through private accounts.

"It was the worst robbery in the history of Pakistan's democracy," he added.

Countering government spokesperson Firdous Ashiq Awan's allegation that the PML-N was attempting to influence the ECP, he said: "We are only demanding that the matter be resolved."

The PML-N asked the ECP to decide the matter as soon as possible, Iqbal said, instead accusing the PTI of hindering the ECP from functioning freely under a strategy.

"Now we have understood why the PTI created obstacles in agreement on two ECP members' [appointment] and now they are waiting for the chief election commissioner to retire so they can raise the point that in the absence of three of its members, the ECP cannot run its business.

"I, being the secretary general of the PML-N, am saying on the record that we have no unreported account," he said.

Iqbal said Prime Minister Imran claims that the PTI has nothing to worry about in the foreign funding case but if that was so "why is secrecy being created around the case? Why pleas in courts and the ECP to keep details of the case away from the public and the media?"

"We demand an open trial of the case," he said, alleging that the premier, "the man who thinks he is a symbol of honesty" wants to maintain secrecy in the case.

"The biggest robbery in democratic history has been revealed. Why don't you present the money trail of PTI's foreign funding?" he said while addressing the prime minister.

Coming to the subject of economy, he said the PTI government during the last 15 months has brought the country to the "verge of total destruction".

He accused the government of having "crushed" the economy, and cited the hike in electricity tariff, rising inflation, declining purchasing power of people and unrest among traders and farmers. Industries are on the course of downsizing, he claimed.

Iqbal said that the government has halved the funding for the Higher Education Commission (HEC) and shelved its new projects.

Despite the bleak scenario, he added, the prime minister said that the economy was picking up. He told the government that "the reality on the ground cannot be concealed with fake figures presented on social media."