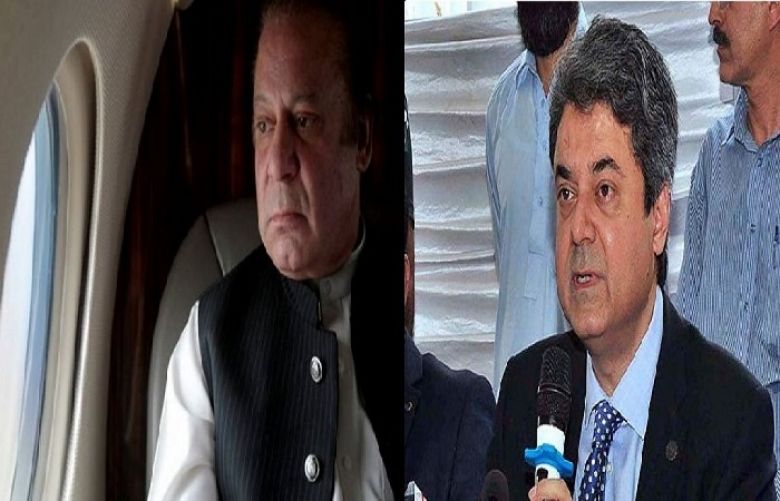 Former prime minister Nawaz Sharif will be allowed to travel abroad for medical treatment for a four-week period against indemnity bonds, Law Minister Farogh Naseem announced Wednesday after a meeting of the federal cabinet’s sub-committee.

The meeting was presided over by Law Minister Farogh Naseem to decide the removal of Nawaz Sharif’s name from the Exit Control List (ECL) on basis of his medical condition.

"This permission will be subject to Nawaz Sharif or Shehbaz Sharif submitting an indemnity bond to the tune of roughly Rs7-7.5 billion to the satisfaction of additional secretary to the Ministry of Interior," he added.

Prime Minister Imran Khan's special assistant on accountability, Shahzad Akbar, added that requests from the Sharif Medical City, as well as the government-formed medical board, were taken into consideration.

"Nawaz has been given this one-time permission only for medical treatment," Akbar said. "It is the federal government's responsibility to ensure a guarantee from him and that that bond was only over surety, not any political gain."

The special assistant said the government understood Nawaz was unwell but stressed that the former premier was required to return to Pakistan after his medical treatment was completed. "The Ministry of Interior will issue the letter of permission," he said.

Akbar further noted that no one should forget the PML-N leader had been sentenced in a mega-corruption case and that investigation was still underway in some cases, including that of the Chaudhry Sugar Mills.

Nawaz was convicted by an accountability court last December in the Al-Azizia corruption reference and awarded him a seven-year imprisonment sentence, alongside a fine worth Rs1.5 billion and $25 million (Rs3.88 billion).

Last night, however, sources had said Nawaz was reportedly annoyed over the government's demand to deposit surety bonds and refused to go abroad to get medical treatment for his critical ailments.

PML-N leader Ata Tarar, according to the sources, had said in this regard: "We have deposited security bonds at the court, will not provide any further bonds. [The PML-N President] Shehbaz Sharif held meeting with Nawaz Sharif for one-and-a-half hour at Jati Umra and convinced him that his deteriorating health condition never allowed him to remain in Pakistan.”

The Sharif family had thought it advisable not to sign any document that had no legal status because this kind of arrangement could only be done by the court.

The sources said Tarar, who attended couple of meetings of the sub-committee of the federal cabinet in the day time, provided details to Shehbaz Sharif and PML-N Vice-President Maryam Nawaz about the government's demand of surety bonds.

“Shehbaz Sharif, Maryam Nawaz, Barrister Munawar Iqbal, and Attaullah Tarar discussed the issue in detail and also got opinion from other legal brains after which the Sharif family members decided that they would not sign any illegal document to seek removal of Nawaz’ name from ECL,” the sources had said.

“When the NAB reviewed the total cost of the property of the Sharif family in Pakistan they came to know that it is less than even the fine imposed by the NAB court in the corruption cases against Nawaz Sharif,” the sources said.