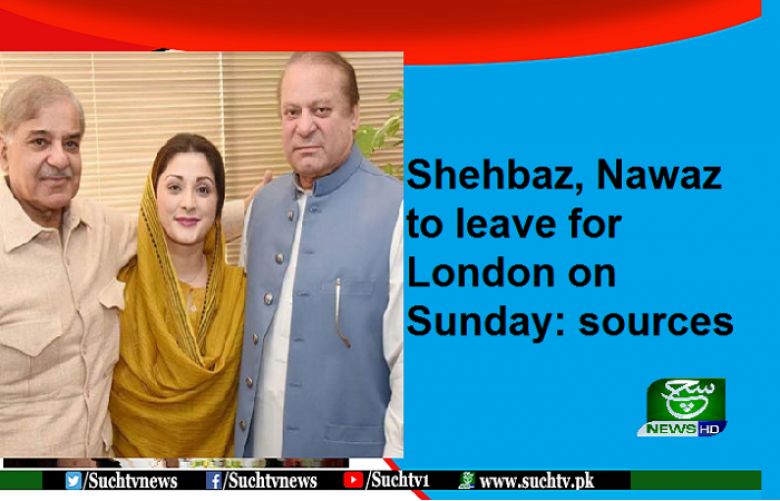 Arrangements have been made at the Harley Street Clinic for the former prime minister's treatment. The Sharif brothers will leave for London on Sunday via a Pakistan International Airlines (PIA) flight.

Sources claimed that the Sharif family was also talking to a doctor in New York.

Earlier, it was reported by this correspondent that Shehbaz would take Nawaz to London for medical treatment.

The source shared that Shehbaz will accompany Nawaz to London and he has already spoken to consultants at one of the Harley Street clinics where patients suffering form drop in platelets are treated privately.

The source added that a final decision will be made when Nawaz is discharged from Services Hospital. He will be treated at Sharif Medical hospital in Jati Umra. It is understood that Shehbaz has been speaking to Nawaz about the need of getting treatment abroad for many days, however, Nawaz refused to consider the option. The trusted source further said Shehbaz has advised Nawaz to consider staying in London for at least five months for full treatment of all medical issues and recovery.

The Pakistan Muslim League-Nawaz (PML-N) president's view, according to the source, has also been supported by Services Hospital’s Dr Mehmood Ayaz, who heads the panel of doctors overseeing the treatment of the former prime minister, who has advised Nawaz to go abroad for treatment.

Dr Ayaz has said the medical board set up for the PML-N leader's treatment would give in writing that he should undergo genetic test from abroad.

He said the foreign visit would become essential if doctors want to examine his body tissues in order to diagnose the exact cause of his illness.

On October 29, the Islamabad High Court suspended Sharif's sentence in the Al-Azizia corruption reference for eight weeks on medical grounds.

A two-member judge bench comprising Justice Amir Farooq and Mohsin Akhtar Kayani had earlier reserved the verdict on the plea seeking the suspension of the former premier's sentence in the case.

On Tuesday, the Lahore High Court bailed Maryam Nawaz Sharif is the Sugar Mill case after establishing that the NAB had failed to prove its case against her and there was no allegation of ill-gotten money and she had declared the income in her papers. Her passport remains with the court on National Accountability Court’s request.