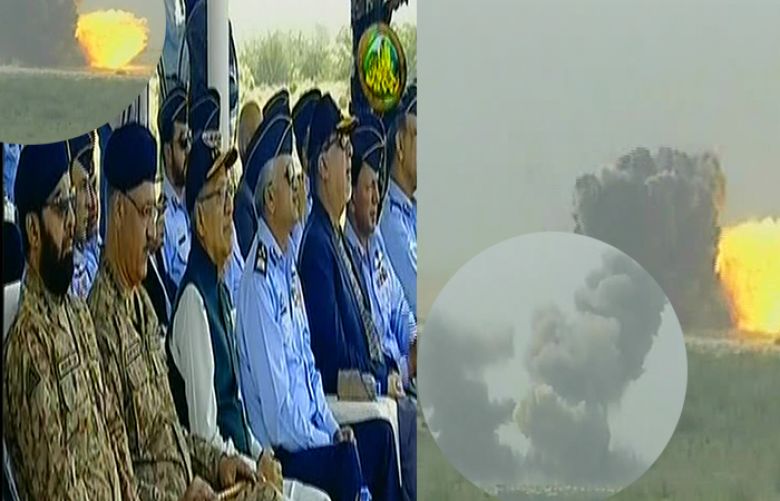 Meanwhile, other fighter aircrafts are flying at lightning speed and dropping bombs on the designated targets.

It is worth mentioning that a day earlier, the Pakistan Navy successfully test-fired a land-based anti-ship missile, ‘Zarb’ as part of a training exercise from the coastal region.

The missile successfully followed its preplanned trajectory and accurately engaged the target at sea, according to a Pakistan Navy spokesperson. Chief of the Naval Staff Admiral Zafar Mahmood Abbasi witnessed the exercise as chief guest.

Speaking on the occasion, the naval chief expressed his utmost satisfaction on the operational readiness of the Pakistan Navy. He said Pakistan’s pursuit of peace and stability has to be taken in the context of its quest for maintaining a peaceful coexistence in the region and not to be misconstrued as weakness.

“Pakistan Navy, being a professionally competent and potent force, is fully capable of thwarting any aggression with an iron fist,” Admiral Abbasi said, adding operationalszation of Zarb Weapon System is depictive of Pakistan’s strong resolve and high level of preparedness.