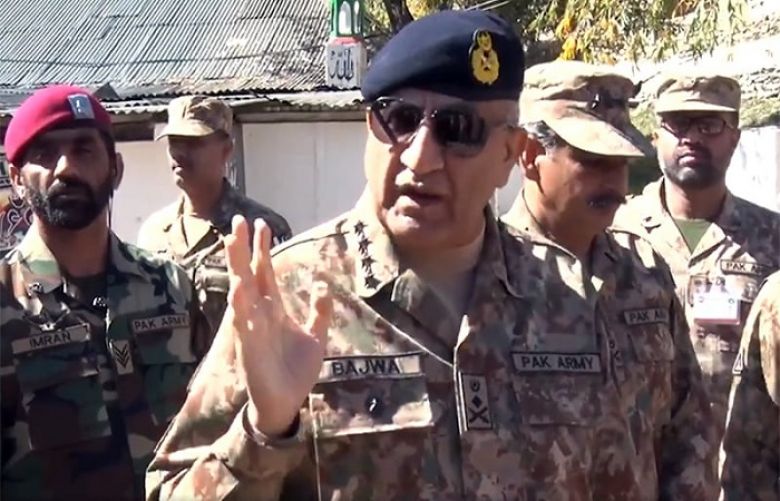 Army chief Gen Qamar Javed Bajwa while visiting troops stationed along the Line of Control (LoC) on Wednesday vowed "to never leave Kashmiris alone" in their fight against Indian oppression.

“Kashmiris in IOJ&K are bravely facing Indian atrocities under continued siege. We shall never leave them alone and play our rightful role at whatever cost”, said Gen Bajwa.

Gen Bajwa's remarks followed a briefing of the "deliberate targeting of civilians" by Indian troops and the response by Pakistan's armed forces.

A day earlier, at least three civilians died and eight others were injured in Azad Jammu and Kashmir after Indian troops resorted to “indiscriminate” shelling from across LoC.

The heavily militarised LoC which splits the disputed region of Kashmir between India and Pakistan has been constantly witnessing ceasefire violations by the Indian army in a serious breach of a November 2003 truce agreement.

According to Syed Shahid Mohyiddin Qadri, secretary civil defence and state disaster management authority, the latest ceasefire violations have pushed the civilian death toll in the current year to 47.

Apart from them, another 236 civilians sustained injuries in the ongoing year, he said.

Qadri said some 50 houses had also been destroyed and 369 houses and nine shops partially damaged due to Indian shelling.

Aside from the above, 11 cattle sheds, four schools, two health facilities, one mosque and 12 vehicles also suffered partial damages.