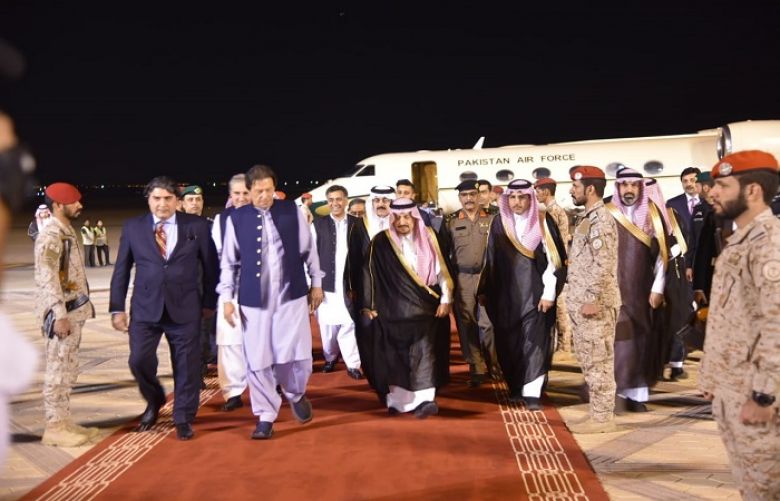 Prime Minister Imran Khan arrived in Saudi Arabia on Tuesday in a bid to de-escalate tensions between Tehran and Riyadh.

"The prime minister will confer with the Saudi leadership in light of his recent consultations with other leaders. Bilateral ties and other regional developments would also form part of the discussions," a statement by the Foreign Office earlier said.

Pakistan and Saudi Arabia are bound in a fraternal relationship marked by mutual trust and understanding, close cooperation and an abiding tradition of supporting each other, the statement added.

This would be PM Imran's third visit to Saudi Arabia this year. His earlier visits were in May and September 2019. From the Saudi side, HRH Crown Prince Mohammed bin Salman paid a state visit to Pakistan in February 2019.

On Sunday, the prime minister travelled to Iran where he reiterated that Pakistan was ready to act as a facilitator between Iran and Saudi Arabia so that the two countries can sort out differences through dialogue.

“Pakistan does not want conflict between Iran and Saudi Arabia...I am happy to facilitate talks between Tehran and Riyadh...I am very hopeful as I had constructive talks with the (Iranian) president,” PM Imran told a joint news conference with President Hassan Rouhani.

He added Pakistan had hosted Saudi Arabia and Iran and was again willing to facilitate them again to iron out their differences. “The issue is complex one but it is possible to sort out differences through dialogue,” he emphasised.

The prime minister also made it clear that Pakistan’s role would be a facilitator and not a mediator.

He stressed that it was imperative for everyone not to allow any conflict to take place in the region as he viewed certain vested interests which wanted to flare up the tensions in the region.

The prime minister had termed his consultations with the Iranian president as very encouraging and said that he would go to Saudi Arabia with a positive mind.

Responding to the message of unity and solidarity among the Muslim nations given out by PM Imran, Khamenei tweeted: "Iran sees #Pakistan as a neighbouring brother."

"With this unprecedented opportunity, the relations of the two countries should be better than what they currently are," he added.

"Security of the borders should be enhanced, and suspended projects like the gas pipeline should be completed," said the Iranian Supreme Leader.

During the meeting with Khamenei, PM Imran thanked Iran for support to the people of occupied Kashmir for their right of self-determination against Indian aggression.

The premier had also noted that Pakistan would do whatever was possible to help lift the sanctions on Iran and set up the deal on a nuclear agreement.

Last month, the premier had held a bilateral meeting with the Iranian president on the sidelines of the 74th UN General Assembly session in New York. He said both the United States and Saudi Arabia had asked him to mediate with Iran to defuse tensions in the Gulf.

There have been a spate of still-unexplained attacks on oil shipping in and around the vital seaway involving Iran and Western powers, as well as drone attacks on the Saudi oil installations. Washington has accused Iran of attacking the vessels with mines as well as of being behind the drone assault — a charge Tehran strongly denies.