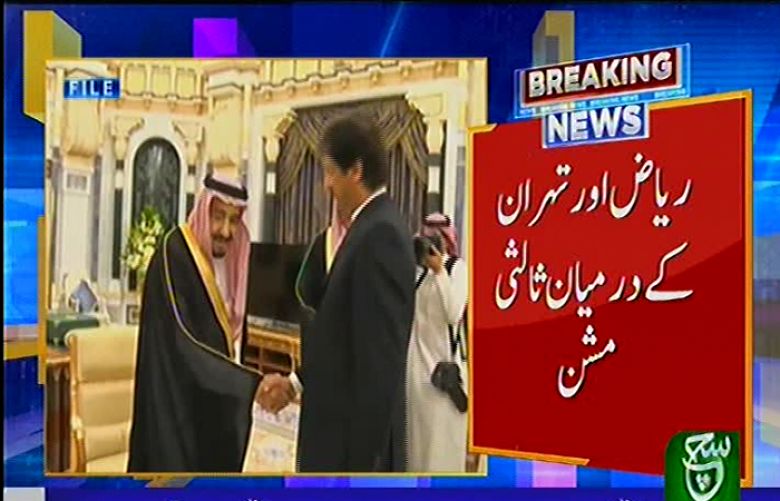 Following his one-day trip to Iran two days ago, Prime Minister Imran Khan on Tuesday reached Saudi Arabia as part of his initiative for peace and security in the region.

After he landed at Riyadh airport, Prime Minister Imran was received at the royal terminal by Riyadh Governor Faisal bin Bandar Al Saud, minister of state Musaad bin Mohammed Al Aiban, the Pakistani ambassador to Saudi Arabia and other officials.

The premier is accompanied on the visit by Foreign Minister Shah Mahmood Qureshi and Special Assistant to the Prime Minister on Overseas Pakistanis Syed Zulfikar Bukhari.

According to the Foreign Office, the prime minister during the trip will confer with the Saudi leadership in light of his recent consultations with other leaders. Bilateral ties and other regional developments will also be part of the discussions, Radio Pakistan reported.

On Sunday, Imran met with Iran’s Supreme Leader Ayatollah Ali Khamenei and Iranian President Hassan Rouhani in Tehran on a one-day official trip. In the meetings, the leaders emphasised the need for peace in the region.

“In the past, Pakistan had hosted Saudi Arabia and Iran and is again willing to facilitate the brotherly countries to iron out their differences,” the premier had said in Tehran, adding that it was Pakistan's own initiative to act as a “facilitator".

Tensions in the region have been high for months, following US President Donald Trump’s decision to impose crushing sanctions that target Iran’s crude oil sales and have crippled its economy. Those sanctions came after Trump unilaterally withdrew the US from Tehran’s nuclear deal with world powers last year.

The tensions culminated in a September 14 attack on key Saudi oil infrastructure that halved the kingdom’s oil production.

The US blames Iran for the attack, something Tehran denies. Yemen’s Houthi rebels, whom the kingdom has been fighting in a years-long war, claimed the attack. Saudi Arabia also blamed the attack on Iran. However, in an interview with CBS programme “60 Minutes”, the crown prince stated that a war with Iran will be catastrophic for the global economy.

There have been at least four major and minor initiatives by Pakistan to mediate between the two countries since the 80s. Pakistan first tried its hand at mediation in the Middle East rivalry during the Iran-Iraq war.

Later in 1997, a meeting of the leadership of Iran and Saudi Arabia was hosted in Islamabad on the sidelines of an Organisation of Islamic Cooperation summit.

Former president Pervez Musharraf also tried to make headway during 2003-2004. However, his efforts did not make progress because he was seen as too close to the United States.

The most recent initiative was in 2016, when former prime minister Nawaz Sharif and the army chief tried to mediate after tensions rose in the aftermath of the execution of top Saudi Shia cleric Baqir Al-Nimr. On that occasion, Saudi Arabia did not encourage the initiative.