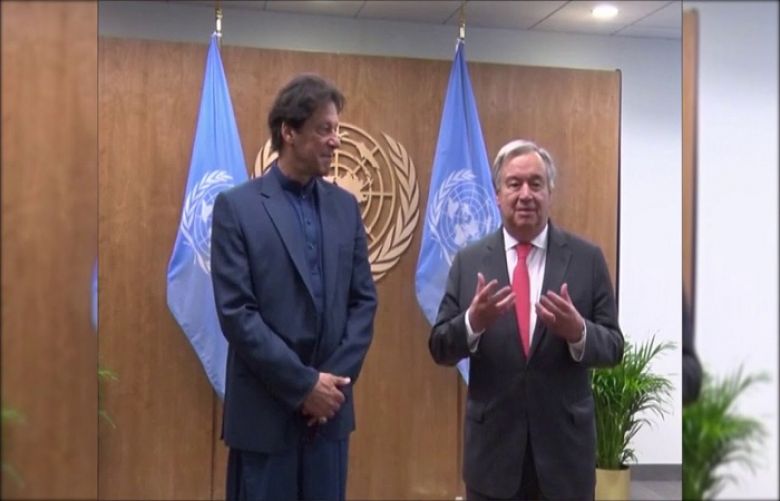 Prime Minister Imran Khan on Saturday met UN Secretary-General Antonio Guterres in New York and commended him for his clear articulation of the UN position on Kashmir dispute.

Guterres during the meeting with PM Imran reiterated his deep concern over the human rights and humanitarian situation in Indian occupied Kashmir.

Guterres reaffirmed that he would remain engaged on the issue and conveyed that his offer to help facilitate a peaceful solution continued to stand.

Commending the secretary-general for his clear articulation of the UN position on Kashmir dispute, the prime minister briefed him on the 54-days long siege of over eight million Kashmiris amidst communications blackout. Such draconian lock-down had no parallel in recent history and the need for its immediate lifting could not be stressed enough.

The prime minister reiterated Pakistan's rejection of Indian illegal and unilateral actions of August 5 as these were in clear violation of UN Security Council resolutions.

The prime minister highlighted the risks to regional peace and security that arose from India's illegal and irresponsible actions, underscoring the responsibility of the UN and international community to take urgent steps to save lives and help resolve the long-standing Kashmir dispute.