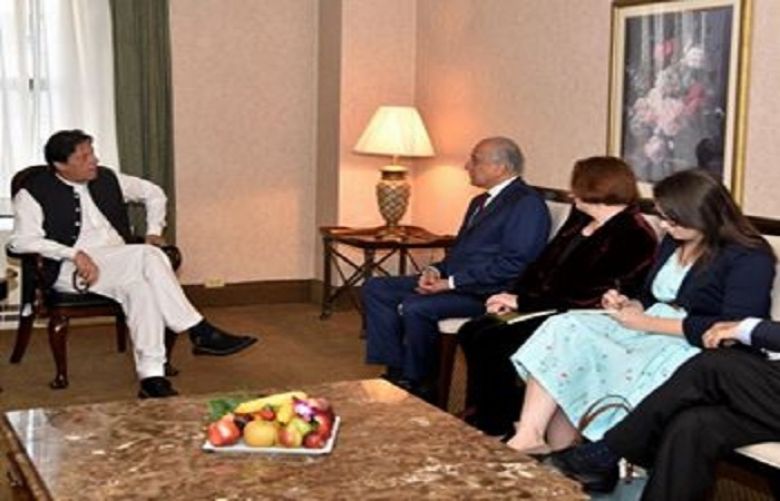 Prime Minister Imran Khan and Amnesty International Secretary General Komi Naidoo on Sunday talked about the "dire human rights and humanitarian situation" in occupied Kashmir as the latter called upon the former.

PM Imran, who reached the United States a day prior to attend the 74th session of the United Nations General Assembly (UNGA), appreciated Amnesty International's role "in presenting the real state of human rights in the occupied territory and amplifying the voices of the Kashmiri population in a state of seven-week long lockdown" ever "since India’s illegal and unilateral actions of 5 August 2019".

According to the statement, Amnesty's work and "efforts had helped raise international community’s awareness about the continuing suffering of the Kashmiri people".

The premier expressed his gratitude to Naidoo for the fact that the British human rights NGO published a report on India's use of pellet guns and the devastating impact they had on the Kashmiri folks.
Foreign Minister Shah Mehmood Qureshi, who was also in the meeting, "noted that the two UN reports on Kashmir served as a strong basis for continued civil society advocacy in support of the Kashmiri people", the statement read.

Naidoo, on the other hand, briefed PM Imran on "Amnesty’s advocacy work on Kashmir including #LetKashmirSpeak", it said, adding that the Amnesty boss "updated the Prime Minister on Amnesty’s work relating to climate justice and suggested consideration of Global South advocacy by the Prime Minister on a range of climate change related issues".
On his Twitter account, Naidoo termed the discussion with PM Imran a "good meeting". He added: "Also discussed the situation in Kashmir, where both India &Pakistan must implement @UNHumanRights recommendations."

Good meeting with @ImranKhanPTI. I welcome his leadership on the climate crisis & his commitment to prioritise it for Pakistan, one of the most vulnerable countries. Also discussed the situation in Kashmir, where both India &Pakistan must implement @UNHumanRights recommendations. pic.twitter.com/WxD7gSzjni