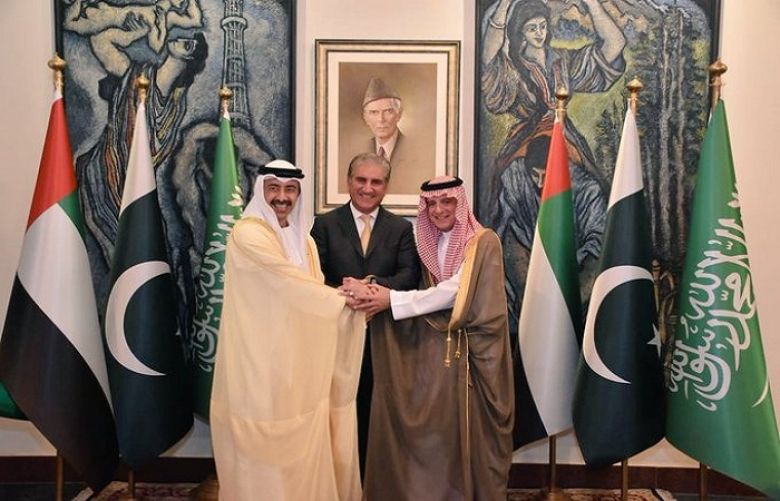 Foreign Minister Shah Mahmood Qureshi has urged the Muslim Ummah to play an effective role in resolution of Kashmir issue.

Talking to media in Islamabad on Wednesday evening, he said that Foreign Ministers of Saudi Arabia and UAE are on official visit to Pakistan and they have been briefed about the situation in Indian Occupied Kashmir. He said both countries are supporting Pakistan's stance on Kashmir issue.

The Foreign Minister said Pakistan wants to hold a special meeting of OIC on Kashmir issue and Saudi Arabia and UAE have assured their full support in this regard.  He said the meeting of OIC Coordination Group will be held in New York on the sidelines of UN General Assembly.

Saudi and UAE counterparts, along with their respective delegations, held a meeting with Foreign Minister Shah Mahmood Qureshi in Islamabad this evening.

During the meeting, they exchanged views on gross human rights violations in Indian Occupied Kashmir and precarious situation of peace and stability in the region.

Shah Mahmood Qureshi apprised the visiting dignitaries about the unilateral and illegal measures taken on 5th of the last month by the New Delhi regime in the Occupied Kashmir and fallout of such steps.

Shah Mahmood Quershi welcomed the solid stance of the OIC and its commission on human rights regarding gross human rights violations continuing in the Indian Occupied Kashmir.