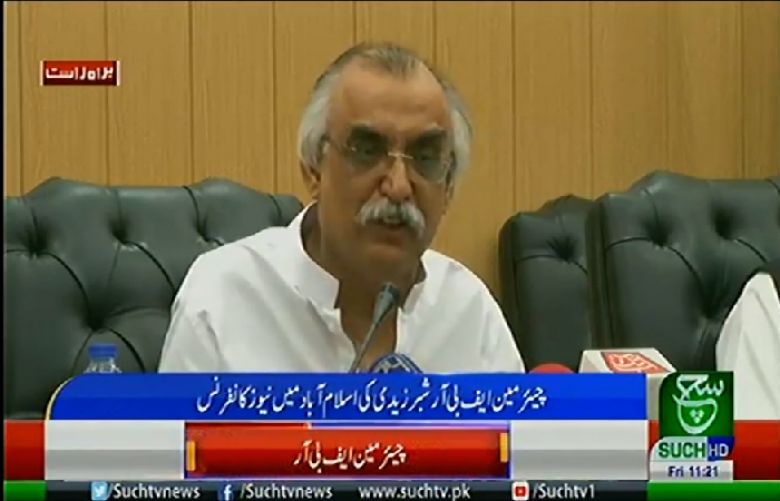 Chairman Federal Board of Revenue Shabbar Ali Zaidi today (Friday) talking to the media said that bringing fix tax scheme for small shop and business owners was being deliberated upon.

The Federal Board of Revenue (FBR) Chairman, Shabbar Zaidi, has said there was no justification behind the strike of traders, and the Board would not back out from the condition of getting computerised national identity cards (CNICs) on buying of more than Rs50,000.

The Chairman said that there was undue criticism and propaganda over the CNIC issue which came under consideration in the talks with the traders and businessmen of Karachi.

Brushing aside the impression of new taxes levied on the textile export, Chairman Federal Board of Revenue Shabbar Zaidi stressed that, “Export sector already had [tax related] exemptions and they still have it.”

Speaking at a press conference, he said “it was our policy to not impose any new taxes” on the textile export, he elucidated.

Owing to a number of complaints regarding sales tax registration, the FBR chief told that the board has now automated the system.

The FBR will gradually move towards a complete shift on automation and reduce the human involvement in the system, said Zaidi.

“A new FBR will be the one, which will be created with automation,” he added.

Talking about the large scale transfers and appointments of the FBR officials, Zaidi said it was done in accordance with the law.

A new FBR will be formed by the people who are present inside the entity today, he continued.

About the harassing attitude of the FBR officials, Zaidi warned whoever was involved in such an act should not remain in the board.

“Pakistan is facing a historic current and trade deficit,” he pointed out while assuring that the Afghan transit trade and smuggling issue were being seriously addressed by the board.