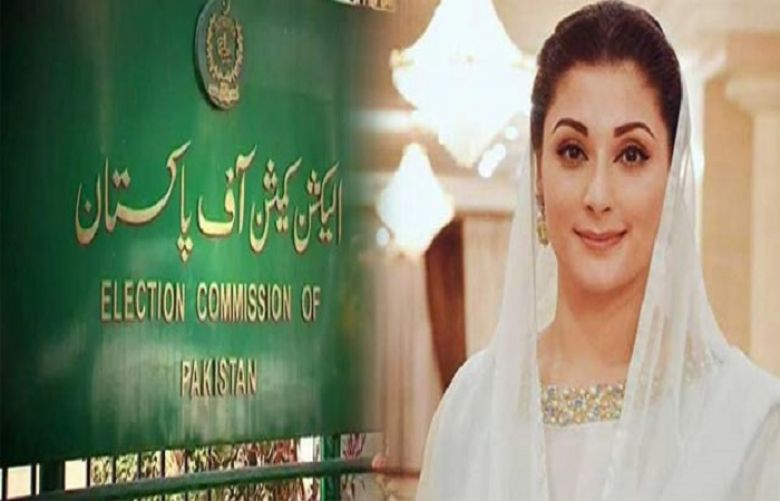 Election Commission of Pakistan (ECP) has adjourned hearing on petition against the appointment of Maryam Nawaz as vice president of Pakistan Muslim League-Nawaz (PML-N) till August 01.

Lawyer Jahangir Jadoon and Barrister Zafarullah appeared before ECP on behalf of Maryam Nawaz whereas complainant’s lawyer failed to appear due to clash of schedule.

Barrister Zafarullah, while presenting his arguments, claimed that the is no constutuional clause in existence which seconds barring of Maryam nawaz from becoming vice president of the party.

Earlier on June 25, Maryam Nawaz, in a written reply to the Election Commission of Pakistan (ECP), stated that there is no restriction in the Consitution and the Election Act barring a convicted individual from holding a party post.The reply further stated that “such laws were made during dictatorships to bar the nomination of the public representatives”.

“There was a clause in Political Parties Order 2002, according to which a sentenced man cannot hold a party position. The parliament had abolished this clause in Election Act 2017,” she added.

Meanwhile, Khyber Pakhtunkhwa (KP) member asked about the submission of appointment notification in the commission over which, the lawyer said that the plaintiff has only pasted newspaper cuttings in the petition. The hearing has been adjourned till July 4.

It is to be noted that the petition against Maryam was filed by PTI MNAs Maleeka Bukhari, Farrukh Habib and Javeria Zafar on May 9. PTI adopted the stance that Maryam Nawaz was ineligible to hold any political or public office as she was sentenced by the court in a corruption reference.

Appointment of ex-PM Nawaz Sharif’s daughter Maryam as party vice president was contradictory to the constitution and law, the plea stated.