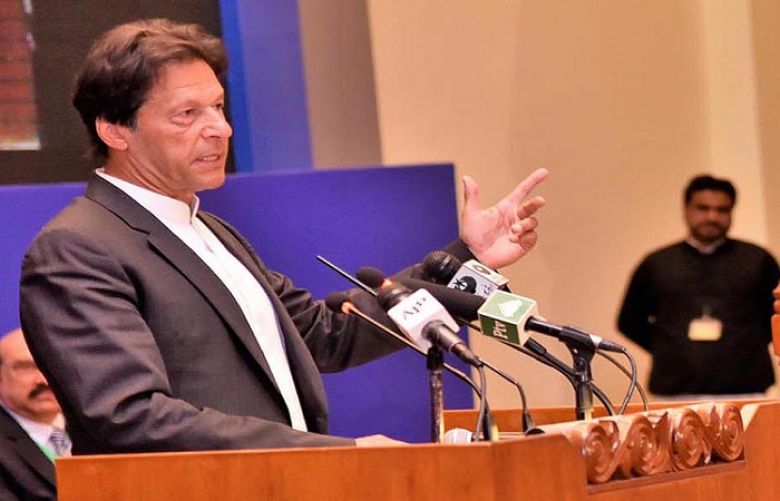 Prime Minister Imran Khan on Saturday said that money laundering and corruption were the biggest reasons for the economic crisis faced by Pakistan.

Prime Minister Imran Khan, speaking on the floor of the National Assembly after the passage of the federal budget and the Finance Bill 2019-20, said that the Pakistani rupee has depreciated because the incumbent government inherited the largest national debt in Pakistan's history.

"The biggest reason for the fall of the Pakistani rupee is money laundering. Money was sent abroad through illicit channels because if those in power send their money outside Pakistan they will not be able to stop others," he said on the floor of the assembly.

He said that Pakistanis had $10billion stashed outside of the country.

"Things are being revealed after investigations into the Zardari group, Omni group, and fake bank accounts. Money was stolen from Pakistan and sent abroad," he said, lashing out at the leaders of the opposition parties Pakistan People's Party (PPP) and the Pakistan Muslim League-Nawaz (PML-N).

He said that, after what had been revealed following the investigation into the opposition leader's family, he had no right to speak on the depreciation of the Pakistani rupee.

"These people are ones responsible themselves. Those who are accused of looting from the people of this country, how can they come and deliver speeches on the floor of this assembly?" he remarked.

"Those accused of billions in corruption become part of the Public Accounts Committee. Can you imagine how we have torn our parliament and democracy into pieces?"

The prime minister lauded members of the government and its allies for participation in and approving the budget by majority. He especially praised the speech by Minister Murad Saeed on the floor as well as the work of Minister of State for Revenue Hammad Azhar, saying that he deserves being promoted to federal minister.

The prime minister criticised the opposition again, and in an apparent jibe at Jamiat Ulema-i-Islam Fazl (JUI-F) chief Fazlur Rehman, slammed the "12th man of politics who goes around gathering people to topple the government every other day".

"Can you believe that you leave behind historic debt and ask others what they did instead? All international ratings agencies look at just one thing: Is the current account in deficit?" he said. "Those who have left us in debt are blaming us. And then they try to mimic Nelson Mandela's voice and ask the why rupee is falling."

Speaking further on the economic measures being by the government, Prime Minister Imran Khan promised that there would be "a complete crackdown on money laundering".

"Any kind of previous loopholes on money laundering will be closed. We are supporting overseas Pakistanis and our remittances are increasing. We are focusing on investment to bring in to Pakistan," he said, adding that different housing schemes by would be launched soon the government which would positively impact 40 directly-related industries.

"We have given Rs217bn subsidy in electricity so 75 percent of consumers are not burdened. We are giving Rs5bn micro-credit for housing, which will Inshallah keep increasing.

"Another sector which we will continue to encourage will be the agriculture sector. We will bring a detailed plan for farmers. We have signed memoranda of understanding with the Chinese in CPEC for transfer of technology to improve livestock and yield," he said.