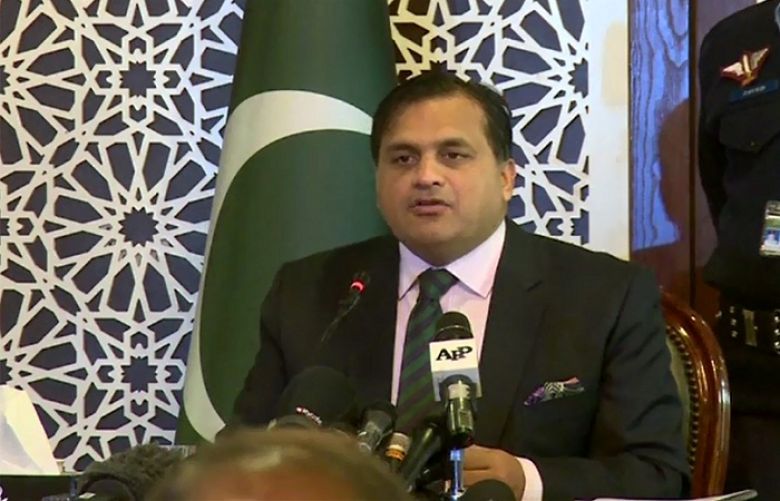 Foreign Office has said Pakistan has offered its services on many occasions for dialogue between the US and Iran to reduce the current tension in their relations.

At his weekly news briefing in Islamabad on Thursday, Foreign Office Spokesperson Dr Muhammad Faisal stressed the need that the international agreement on Iran must be upheld and misgivings should be removed through negotiations.

The Spokesperson confirmed that Iranian Foreign Minister Javad Zarif is arriving in Islamabad this afternoon for talks with Pakistani leadership.

The visiting dignitary will hold talks with his counterpart Shah Mahmood Qureshi tomorrow. He said Pakistan is concerned over the grave situation prevailing in the Persian Gulf and during talks with his Iranian counterpart, Foreign Minister will have a detailed discussion on it.

On Kashmir dispute, the foreign office spokesperson said there cannot be any change in the status of Kashmir without plebiscite in the territory as per the UNSC resolutions and aspirations of Kashmiri people.

The spokesperson denounced Indian atrocities in occupied Kashmir and illegal detention of Hurriyat leaders. He said India instead of misleading international community on Kashmir dispute should accept ground realities and aspirations of the people of Kashmir.

When asked  to comment on the brief interaction between the Foreign Ministers of Pakistan and India on the sidelines of SCO meeting in Bishkek, the spokesperson said that Foreign Minister himself will soon give a statement on it.

Responding to a question, Dr Muhammad Faisal said there has been some good progress in negotiations with Japan for export of skilled manpower to that country.