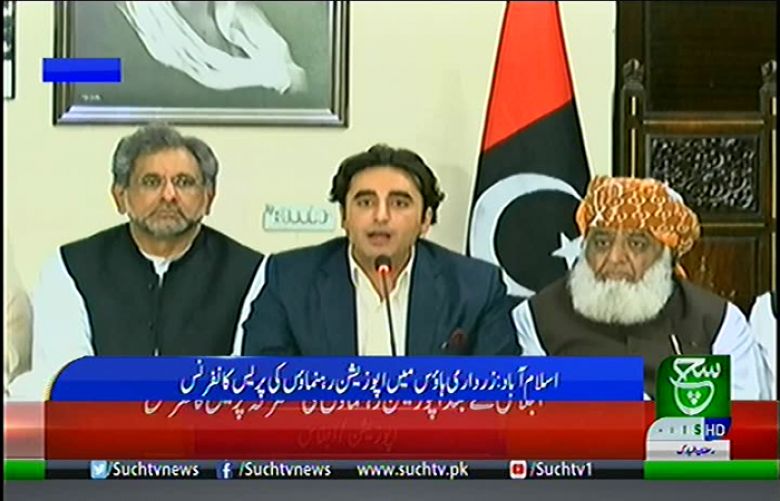 After hosting an Iftar-dinner, Pakistan Peoples Party (PPP) chairman Bilawal Bhutto Zardari on Sunday said that all opposition parties are on the same page to stage protest demonstrations in and outside the parliament against the government after Eidul Fitr.

Addressing a joint press conference at Zardari House in Islamabad, Bilawal said that every political party had its own manifesto and narrative, but owing to immense challenges facing the country, all opposition parties had decided to sit and devise a unanimous strategy to rid the country of incompetent rulers.

A multi-party conference, under the chairmanship of JUI-F chief Maulana Fazlur Rehman will be staged in this regard, he added.

Bilawal said the process of consultations will continue in the days and months to come.

The Iftar-dinner was the first occasion when Bilawal and Maryam Nawaz met face to face as key leaders of their respective parties.

The PML-N delegation was personally received by the PPP chairman upon its arrival at Zardari House in Islamabad. Bilawal greeted Maryam and embraced Hamza Shehbaz while Maryam patted him on the back in return.

On Friday, Bilawal held a meeting of the PPP’s core committee to discuss the ongoing financial crisis in the country and chalk out a strategy for the party’s anti-government movement which it has announced would be launched after Eidul Fitr against the rising inflation, the International Monetary Fund (IMF) deal and the deteriorating economic conditions.

Later at night, former president Zardari met the JUI-F chief to discuss a joint strategy against the government and the possibility of forging an alliance.

The opposition parties are gearing up to take on the government in the wake of the country’s financial crisis and increasing prices of essential commodities.

The PML-N will hold a meeting on May 20 to discuss its future course of action. It was expected to be held at the opposition leader’s chamber but now the sources said it could take place at the residence of party leader Tariq Fazal Chaudhry.

The JUI-F chief has already announced that his party would march on Islamabad and shut down the federal capital in protest against the government’s policies.