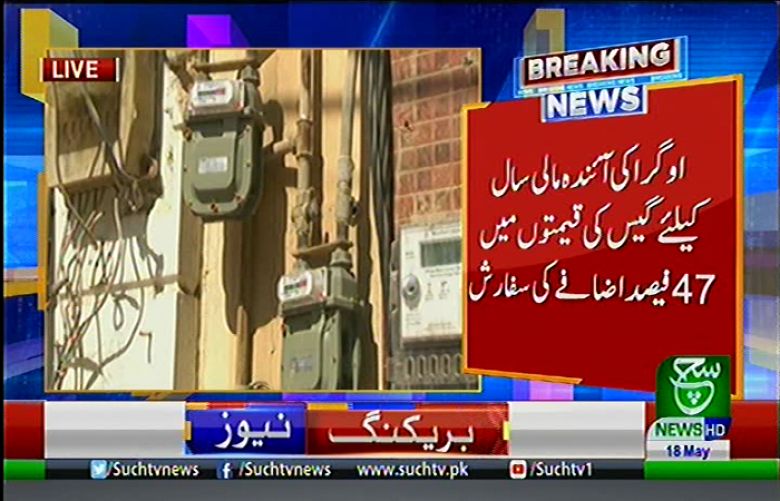 The gas prices in Punjab and Khyber-Pakhtunkhwa may further increase by 47 per cent, while in Sindh and Balochistan by 28 per cent from the next fiscal year (July 1, 2019) due to the depreciation of the rupee against the dollar.

The Oil and Gas Regulatory Authority (Ogra) on Friday sent a summary to the government in this regard.

The Pakistan Tehreek-e-Insaf (PTI) government has already hiked the gas prices up to 143 per cent during the ongoing fiscal year.

The rupee hit a new all-time low of 149.35 to the US dollar in the interbank market on Friday.

However, Ogra had taken Rs150 per US dollar exchange rate to determine the prices of gas for the consumers for next fiscal year 2019-20.

The Sui Northern Gas Pipelines Limited (SNGPL) – which supplies gas to Punjab and Khyber-Pakhtunkhwa – had recommended an average increase in gas prices by 144 per cent. However, Ogra allowed 47 per cent average hike.

Similarly, the Sui Southern Gas Company Limited (SSGCL) – which supplies gas to Sindh and Balochistan – had recommended an increase in gas prices by 30 per cent. But the regulator allowed a 28 per cent average increase in prices.

Ogra has recommended increasing gas prices for consumers falling under the first slab by 18 per cent, second slab 29 per cent, third slab 32 per cent, fourth slab 12 per cent, fifth slab four per cent and sixth slab also four per cent.

The government has already agreed to the IMF’s demand of increasing prices of gas and electricity.

The SNGPL had estimated its revenue requirement of Rs474.6 billion, which includes Rs309.5 billion for the next financial year and an adjustment for the shortfall of Rs165.12 billion during the previous years.

The regulator allowed total revenue of Rs293.3 billion, including Rs264.58 billion for the next financial year 2018-19 and Rs28.7 billion revenue for previous years’ adjustments.

The gas utility has been allowed to recover this revenue shortfall from the gas consumers by increasing prices of gas by 47 per cent.

The regulator has also allowed SNGPL to build an 8,000 kilometres-long distribution network with an initial cost of Rs5.3 billion.

It also allowed Rs1.12 billion to be recovered from gas consumers for rehabilitation of the system and unaccounted for gas (UFG) control.

An amount of Rs3.2 billion has been allowed for 400,000 new domestic gas connections.

The regulator allowed 6.30 per cent UFG. Of the total gas theft amounting to 49.06 billion cubic feet per day, Ogra has put the burden of 29.2 bcfd on the consumers. The total UFG has been assessed at 10.5 per cent.

The SSGCL projected its revenue requirement at Rs279.6 billion, including Rs254.7 billion for the next financial year 2019-20 and Rs24.9 billion for previous years’ adjustment.

The total UFG of the company has been calculated at 15.69 per cent. The regulator allowed 6.30 per cent or Rs19.2 billion to be collected from the consumers.