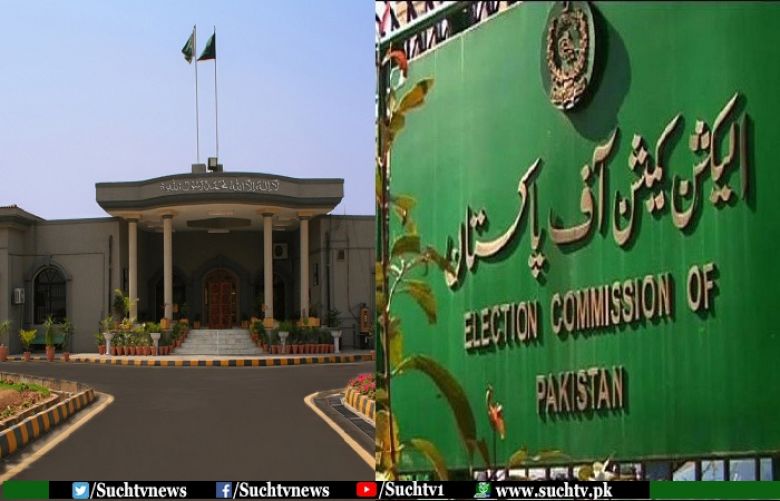 Election Commission of Pakistan was not authorised to disqualify any lawmaker named in the “Fourth schedule”, said the Islamabad High Court (IHC) in its verdict issued on Tuesday.

The high court released its verdict which elucidated powers of the Election Commission of Pakistan (ECP) for disqualifying a legislator whose name is mentioned in the Fourth Schedule of the Anti-Terrorism Act (ATA).

Justice Amir Farooq announced the verdict, saying that ECP was not eligible to declare any lawmaker disqualified included in the list of persons.

Earlier, a petition was filed in the high court against ECP’s move which disqualified Pakistan Tehreek-e-Insaf (PTI) Member of Provincial Assembly (MPA) Shah Muhammad from Khyber Pakhtunkhwa (KP)’s Bannu-89 constituency over his inclusion in the list.

PTI’s Shah Muhammad had been disqualified as MPA and a member of district council by the commission on September 21 – 2017. Muhammad’s case had represented by prominent lawyer Dr Babar Awan.

The Fourth Schedule is a list of proscribed individuals who are suspected of terrorism and/or sectarianism under the Anti-Terrorism Act (ATA), 1997. After credible intelligence information, their names are included in the fourth schedule as prescribed by the Home Department and can be subjected to restrictions on travel, speech and business.

The National Counter Terrorism Authority (NACTA) manages the list of proscribed people in ‘Fourth Schedule’ of the Anti-Terrorism Act (ATA) after collection of data from the federal areas, provinces including the federal capital Islamabad and Gilgit-Baltistan region.

Special Branch of local police initiates placement of the names on the ‘Fourth Schedule’, whereas, Senior Superintendent Police (SSP) Operations forwards reports to the commission of the concerned division. Later, the commission forwards the names of proscribed persons to home secretary’s office of that province.

The commissioner’s officer forwards the file to the interior secretary if the recommendations come from Islamabad.

In some cases, relevant security agencies forward names to the home secretary of the province or the Ministry of Interior while few of the cases are initiated by provincial home departments or the ministry.