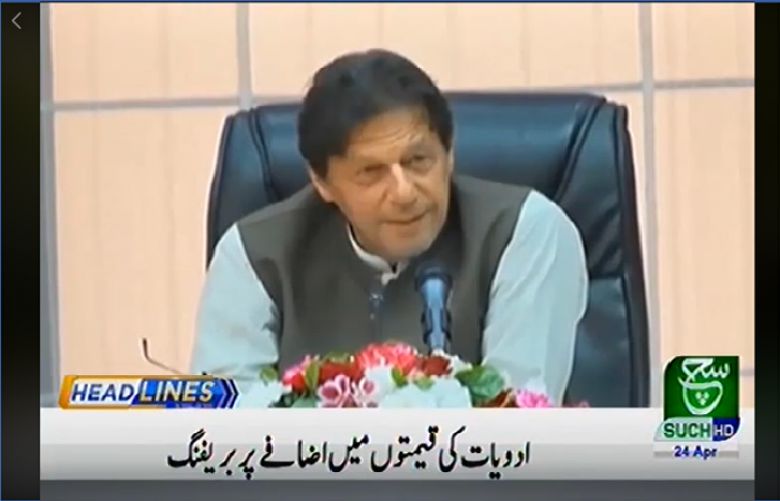 Prime Minister Imran Khan has directed the relevant authorities to bring down prices of drugs after consultation with all the stakeholders.

Briefing the media following a cabinet meeting on Tuesday, Special Assistant to the Prime Minister on Information Firdous Ashiq Awan said a meeting with the representatives of pharmaceutical companies and other stakeholders will be held soon to bring down the prices of medicines.

“The additional amount charged by the pharmaceutical companies will be recovered by the government and deposited with the Pakistan Bait-ul-Maal and utilised to provide free treatment to poor patients suffering from various diseases,” she said.

“The prime minister has directed cabinet members to introduce policies in the public interest and improve their performances in order to resolve the issues faced by the people,” Awan said.

“The premier has already assigned targets to his economic team led by Adviser on Finance Dr Hafeez Sheikh in order to create a people-friendly budget.”

She further said the cabinet has decided to have a check on the prices of essential items during the month of Ramazan and keep an eye on hoarders and cartels.

“Inflation during the last eight months of this government is still less compared with the same period of previous two governments,” the media adviser asserted.

Referring to the prime minister’s upcoming visit to China, Awan said a new Free Trade Agreement (FTA) will be signed with China in order to protect our local industry.

“A new FTA will be signed with China during the visit in order to protect the local industry. The existing FTA cannot cater to the interests of the local industry and it had rather negative impacts on it,” Awan told the media.

She added that due to successful diplomacy of the prime minister, China had agreed to sign the new FTA on the pattern of one it had signed with ASEAN countries on much better terms.

Awan further said the cabinet also discussed the LNG agreements signed by the previous government which were expensive and not in the interest of Pakistan. “The new LNG agreements will be transparent and based on competitive pricing,” she said.

“We have to increase our trade with our immediate neighbours to reap the bilateral benefits.”

She added that Adviser to PM on Commerce Abdul Razzak Dawood apprised the cabinet that 450 Pakistani businessmen will visit China to look for business opportunities that would translate into more production, job opportunities and poverty reduction in the country.

Responding to a question about the recent reshuffle, Awan said it was done to improve performance.

“A balanced cabinet comprising elected and technocrat members are a norm all over the world,” she said.

In response to another question, she said Turkey, Russia, China and India were doing trade with Iran through agreements and Pakistan would also take a decision to have trade with Iran keeping its own interest supreme.

She said if the government was not worried about the hike in drug prices, the prime minister would not have removed his close aide from the post of health minister.

The leaders of former ruling parties, she said, were giving lectures on the economy on various television channels but in fact, they and their parties had played havoc with the national economy and the country was on verge of bankruptcy when the Pakistan Tehreek-e-Insaf came to power.

Responding to a question about the proposed asset declaration scheme, she said it would be finalised by the new economic team and then presented to the relevant forum for approval soon.