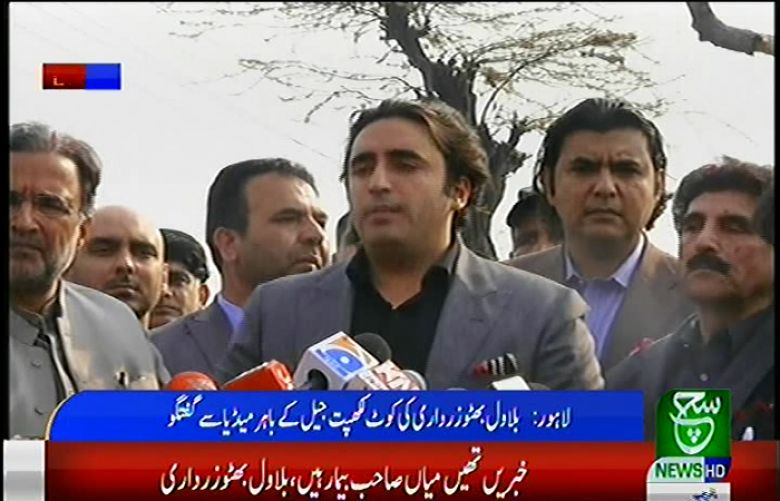 Pakistan Peoples Party (PPP) Chairman Bilawal Bhutto Zardari met Nawaz Sharif at Kot Lakhpat jail today (Monday) and said he got no impression that a deal has been made for the incarcerated former premier to leave the country.

Speaking to the media after his hour-long meeting with Nawaz, Bilawal said, "Today, I visited Mian Sb at Kot Lakhpat jail to inquire about his health."

"It is a historic day for me today as Zulfiqar Ali Bhutto, PPP leaders and workers were imprisoned in this jail."

"I was out of town and came across reports that Mian Sb is unwell. Mian Sb has served as prime minister thrice and there are political differences but I feel our cultural values and religion teach us to look after an ailing Muslim."

"I believe there should be no injustice with anyone and if any prisoner is ill, then it is the government's responsibility to provide them with the best medical treatment."

"I felt upset when I met Mian Sb, he looked very ill. I request on behalf of the PPP that Mian Sb is given the best medical treatment and whatever treatment he has been demanding. I hope the prime minister and his government think on humanitarian grounds," he added.

"Keeping a heart patient under pressure and stress is equivalent to torture."

Bilawal continued, "I only came here to inquire about Mian Sb's health and we mostly discussed that. Obviously we are politicians and discussed other things, including the Charter of Democracy."

"Mian Sb and Benazir Bhutto signed the Charter of Democracy in 2006 and it is our failure that it wasn't fully implemented.

In response to a question regarding Nawaz seeking to go abroad, Bilawal said, "I got no impression or inkling that a deal has been made. Mian Sb is upholding his principles and did not appear to be willing to make a compromise."

"Mian Sb said he is ideological and wants to do ideological politics," he added. "My father spent 11 and a half years in jail and each time it was said that a deal has been struck with former president Pervez Musharraf," Bilawal continued.

Regarding Finance Minister Asad Umar's criticism of his speech in the National Assembly, Bilawal said, "The parha likha jahil [educated illiterate] Asad Umar criticised me for speaking in English. Did Umar speak in English or Urdu in the company that he used to work for?"

"PM Imran through a notification slashed his father's name, someone should tell Umar that I write Zardari in my name along with Bhutto. Umar should not indulge in politics of hypocrisy," the PPP chairman asserted.

PPP leader Kaira had submitted a request to the Punjab home department on behalf of Bilawal to meet the incarcerated former premier on Saturday.

In the request, the PPP chairman sought permission to meet Nawaz in jail to inquire about his health. "It would be appreciated if you could kindly manage this visit for today," it read.

Prime Minister Imran Khan on Saturday asked Punjab Chief Minister Usman Buzdar to ensure that every health facility in the country is made available for Nawaz to get the treatment of his choice.

Nawaz has been imprisoned at Kot Lakhpat jail since December 2018 following his conviction in a corruption reference in line with the Supreme Court’s July 2017 verdict.