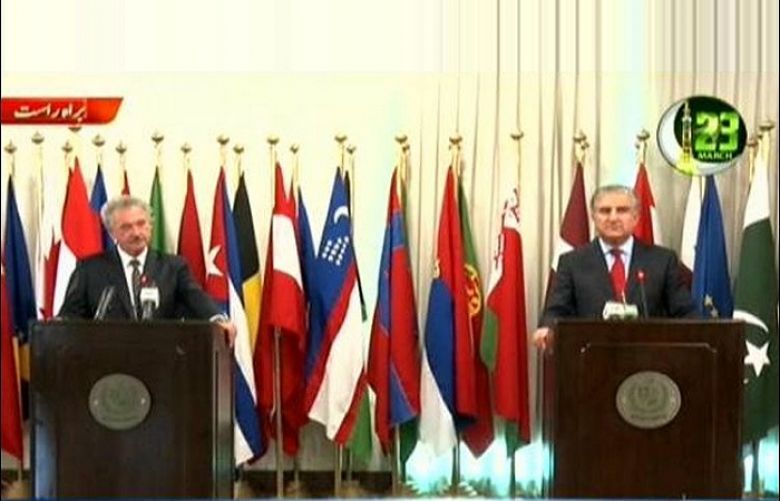 FM Qureshi has thanked his Luxembourgian counterpart for paying his first visit to Pakistan.

Both leaders also exchanged views on bilateral relations, trade and matters of mutual interests. The foreign ministers of both countries agreed exchange of delegations for enhancing bilateral ties besides cooperation in science, technology and education sectors.

While addressing a joint press conference, the foreign minister said that he has discussed the regional situation with Luxembourg counterpart and clarified the position of Pakistan over recent escalation with India.

Pakistan desired longstanding peace establishment in the region and Islamabad exhibited tolerance despite aggressive moves by the New Delhi.

He said that violation of ceasefire line had made from Indian side despite the assurance of investigation into Pulwama incident by Pakistan. Qureshi added that Islamabad has invited India for dialogues on every platform.

The foreign minister said that the Pakistani authorities handed back Indian pilot as a peace gesture.

The Luxembourgian foreign minister-led delegation was also apprised over ongoing atrocities against Kashmiris in Indian occupied Jammu and Kashmir.

Qureshi said that initiation of summit-level dialogues between Pakistan and the European Union (EU) were discussed with the Luxembourgian foreign minister. Agreements related to the dialogues will be signed in the next session, he added.

He said that Pakistan has possessed a wide scope of investments, whereas the Luxembourg government has agreed to increase trade volume and investments.

Qureshi said the EU was a major trade partner and it contained prime importance for Pakistan. Islamabad wanted to become a business partner of the European Union.

The foreign minister announced that his German counterpart was expected to visit Pakistan soon.

FM Jean Asselborn, while addressing the presser, expressed deep concerns over escalation between Pakistan and India.

He said that his government had expressed solidarity with Pakistan as well. He praised the decision of Prime Minister Imran Khan for releasing arrested Indian pilot in a move to defuse tensions between the neighbouring countries.

Asselborn also acknowledged Islamabad’s role in Afghanistan reconciliation process, saying that the Luxembourg government was in favour of an early resolution of the issue through dialogues between the Afghan government and Taliban.

Jean Asselbonr praised the positive and effective role of Pakistan for peace establishment in the region.

The Luxembourgian foreign minister said that his government stood firm to support all countries working towards regional peace.

He said that the international community has raised concerns over the current situation of Indian occupied Jammu and Kashmir.

Asselborn said Luxembourg and Pakistan have agreed to increase cooperation in trade and other sectors that would expand bilateral relations of both countries.