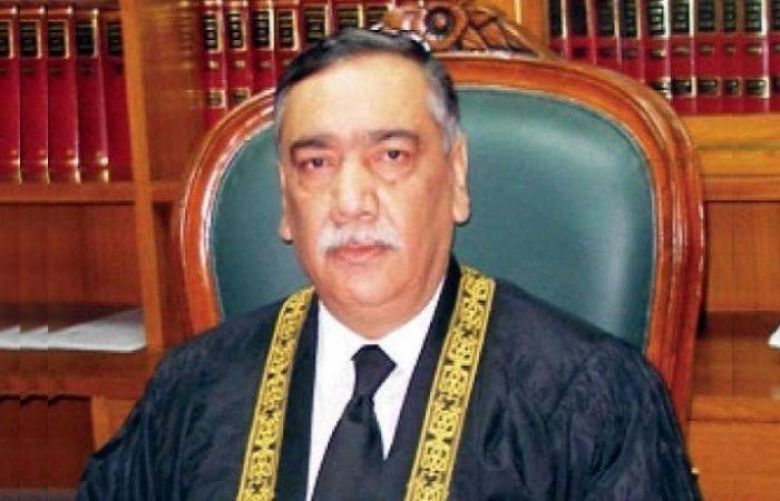 Chief Justice of Pakistan Justice Asif Saeed Khosa on Wednesday hinted at life imprisonment for those who give false testimonies.

A bench headed by the chief justice heard a case regarding action against false witnesses. Mohammad Arshad, who had issued a false testimony in ASI Mazhar Hussain's murder case, appeared before the court.

As the hearing went under way, CJP Khosa remarked, "As per the law, life imprisonment is handed to those who give false testimonies."

"He [Arshad] says that he saw the suspect in torchlight, however, other witnesses claim that it was pitch dark there. A man was sentenced to death over your testimony, tell us why we shouldn't conduct an inquiry against you?" Justice Khosa further questioned. "You gave a false testimony to save the police," he added.

Justice Khosa then asked the Punjab prosecutor general regarding what the court can do on this matter. "A trial court will conduct an inquiry on the matter on the state's request and the suspect's testimony and medical report will be examined."

The court then went on break and as the hearing resumed, the chief justice asked the suspect, "You said pellets hit your leg as well. Were you wearing a pant made out of steel?"

In response, Arshad said, "I removed the pellets from my arm and maintain that I only spoke the truth." Justice Khosa then remarked, "The first statement you issued was also under oath."

Wrapping up the case, the court rejected Arshad's testimony and transferred it to an anti-terrorism court.

"Muhammad Arshad lied before an anti-terrorism court. The Supreme Court cannot conduct the trial of a false witness and a first class magistrate conducts the trial in such cases," Justice Khosa said.