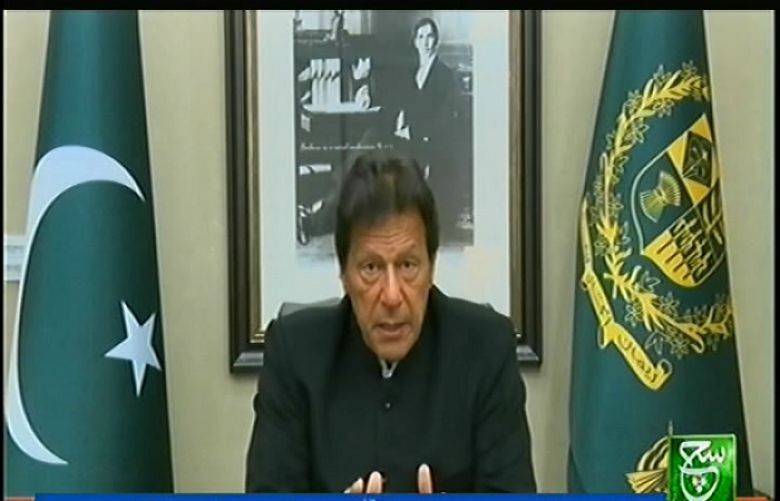 In a video message to the nation, the prime minister responded to Indian allegations regarding Pakistan's involvement in the attack which killed 44 Indian paramilitary soldiers and said, "I am responding to the Indian government now because the Saudi crown prince was visiting the country and we were busy with that."

"India accused Pakistan without any evidence and without thinking how this [attack] would benefit us," he added. "Would even a fool try to sabotage such an important visit as that of the Saudi crown prince?" the prime minister asked.

PM Imran continued, "We have been fighting against terrorism for the past 15 years. How will Pakistan benefit from such incidents?"

Stating, "I want to ask India if they want to keep living in the past", the premier said, "We want stability."

The premier asserted, "I say it clearly this is a Naya Pakistan and a new mindset."

"We are ready for talks with India on terrorism," he said while adding that "India talks about including terrorism in dialogue with Pakistan". "Terrorism is a big issue facing this region and we want to eliminate it," PM Imran asserted.

"Kashmiris are not afraid of death anymore. There must be a reason for that. Should there not be a discussion in India on this?" he asked. "Which law in the world allows everyone to become a judge, jury?"

Questioning whether India "wants to resolve the issue through military", PM Imran said, "This has never been a successful measure."

The premier continued, "I have been hearing and seeing on Indian media that politicians there are calling for revenge from Pakistan. If India thinks it will attack Pakistan then we will not just think but retaliate."

"It is on one's hand to initiate a war but not in one's hand to end it," he stressed. "The Kashmir issue like the Afghan issue will be resolved through talks."

The already sour relations between India and Pakistan have worsened over the past week as New Delhi piled blame on Islamabad for the Pulwama attack. Pakistan's leadership has strongly refuted the allegations.

Some 44 Indian paramilitary personnel were killed last week when an explosives-packed van rammed a convoy transporting 2,500 security forces in Pulwama, in the deadliest attack in Indian-occupied Kashmir in 30 years.