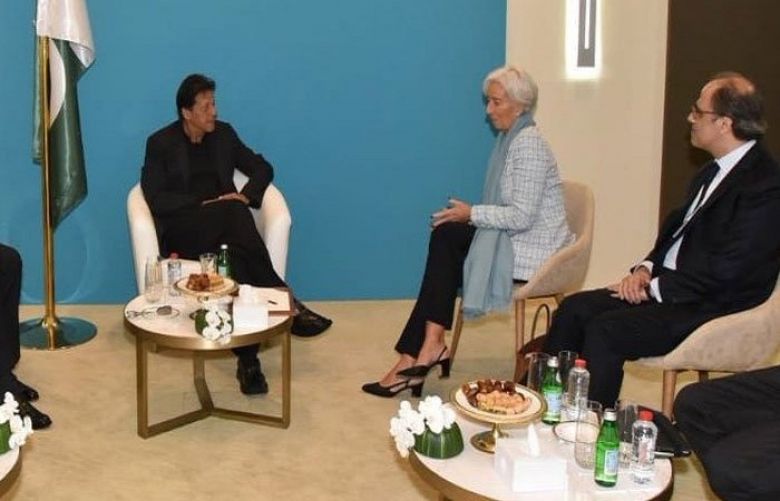 Prime Minister Imran Khan on Sunday met with Christine Lagarde, the managing director of the International Monetary Fund (IMF), on the sidelines of the World Government Summit in Dubai.

A joint declaration issued by the Lagarde after the meeting said: “I had a good and constructive meeting with Prime Minister Khan, during which we discussed recent economic developments and prospects for Pakistan in the context of ongoing discussions toward an IMF-supported program.

“I reiterated that the IMF stands ready to support Pakistan. I also highlighted that decisive policies and a strong package of economic reforms would enable Pakistan to restore the resilience of its economy and lay the foundations for stronger and more inclusive growth. As emphasized in the new government’s policy agenda, protecting the poor and strengthening governance are key priorities to improve people’s living standards in a sustainable manner.”

Pakistan is seeking its 13th bailout since the late 1980s to deal with a current account deficit that threatens to trigger a balance of payments crisis, but talks have been delayed by difficulties in reconciling IMF reform demands with Islamabad’s fears the push is too drastic and could hurt economic growth.

The premier is in Dubai on a day-long visit, on the invitation of Sheikh Mohammad Bin Rashid Al-Maktoum to participate in the seventh edition of the World Government Summit. He is accompanied by Foreign Minister Shah Mehmood Qureshi, Finance Minister Asad Umar, Minister for Maritime Affairs Syed Ali Haider Zaidi and Adviser to the PM on Commerce Abdul Razak Dawood.

This annual gathering of heads of states/government, policymakers, business leaders and experts will provide an occasion to discuss current and future opportunities to improve governance through reform, innovation and technology.