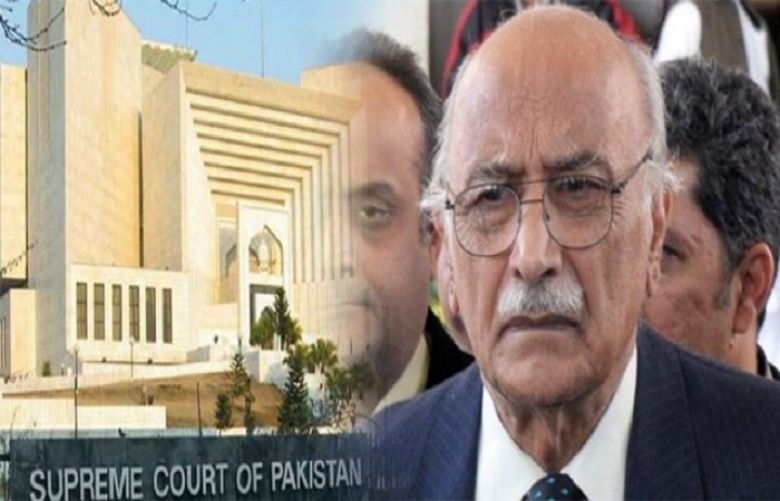 The report submitted states that the FIA had tried to "unearth the facts and bring truth to light, but the investigation has reached a dead end".

In a compliance report submitted to the Supreme Court on Saturday, the Federal Investigation Agency (FIA) has sought the help and guidance of the apex court in collecting sufficient evidence in the case concerning the manipulation of the 1990 elections and the implementation of the Supreme Court's landmark 2012 verdict on it.

The apex court will resume hearing a case regarding the implementation of the 2012 verdict on Monday (February 11).

On Jan 11, then former chief justice (r) mian saqib nisar, after accepting the plea of the family of the late Air Marshal Asghar Khan, had ordered fixing of the matter before a bench after his retirement.

A three-member bench of the apex court, consisting of Justice Gulzar Ahmed, Justice Faisal Arab and Justice Ijazul Ahsan, will take up the case on Feb 11.

On Dec 29, 2018, the FIA had suggested to the SC that it close the implementation case since it did not have enough evidence to launch a criminal prosecution against individuals named in the judgement.

In an earlier hearing, the court had decided that it was not satisfied with the conclusions reached by the FIA and asked the agency to submit a response to Khan's family's joint reply in which they opposed the suggestion to close the case.

In its report submitted today, the FIA said they had left "no stone unturned in tracing evidence relating to the disbursement of alleged money to politicians".

They said all important witnesses, including central figure retired Brig Hamid Saeed Akhtar, had been examined.

Bank records were scrutinised while statements of the concerned bank officers were also recorded. Politicians were also interviewed, the FIA has said.

As per the FIA report, the assistance of the Pakistan Electronic Media Regulatory Authority (Pemra), the National Accountability Bureau (NAB) and Ministry of Defence had also been sought. The report stated that over 190 television programmes were analysed and the defence ministry had been contacted to provide information regarding details required to find necessary evidence.

However, the investigation could not reach a logical conclusion as no Army officer gave any statement of handing over money to any private person directly.

It added that documents provided by retired Brig Hamid Saeed Akhtar showed that money was distributed in Sindh, but he had not disclosed the names of officers who actually distributed the money. Receipts of the money being received by politicians, which the brigadier had mentioned, were also not provided to the FIA.

As per the report, Brig Hamid said the receipts were sent to General Headquarters (GHQ), but when FIA asked retd Gen Asad Durrani, he denied having any information of such receipts.

The FIA added that despite the FIA writing to the defence ministry about the whereabouts of certain intelligence agency personnel, the intelligence agency team responsible for the distribution of funds in Punjab and elsewhere could not be ascertained.

Additionally, the FIA said that certain bank account details, which would complete the money trail needed for prosecution, had not been provided.

Information Minister Fawad Chaudhry on Saturday welcomed the resumption of the case hearings.

In a message shared on Twitter, Chaudhry added that Prime Minister Imran Khan had already given the FIA orders to act upon the apex court's orders pertaining to the case.

The information minister added that the case makes the "political character" of the PML-N "evident", adding that in a veiled swipe at the PPP.

That it was "interesting" that the political heirs of former prime minister Benazir Bhutto, who had been the main target of those who engineered the 1990s election were now "sitting in PML-N's lap".

Moreover, PPP provincial minister Saeed Ghani praised the apex court for hearing the Asghar Khan reference and demanded that a TV interview of philanthropist Abdul Sattar Edhi should also be made part of the reference.

He alleged that the national exchequer was looted to hamper the political progress of Benazir Bhutto. “Millions of rupees were spent on the character assassination of Benazir Bhutto and her husband Asif Ali Zardari,” Ghani added.

In 1996, Asghar Khan had filed a human rights petition in the SC, accusing Inter-Services Intelligence (ISI) of doling out money to a group of politicians in the 1990s.

The case was initiated by the air marshal after Benazir Bhutto's interior minister, retired general Naseerullah Babar, had claimed in the National Assembly in 1994 that the ISI had disbursed funds to "purchase" the loyalty of politicians and public figures so as to manipulate the 1990 elections, form the Islami Jamhoori Ittehad (IJI), and bring about the defeat of the PPP.

Sixteen years after the petition was filed, the SC in its judgement penned by then chief justice Iftikhar Chaudhry ruled that the 1990s general elections had been "polluted" by dishing out Rs140m to a particular group of politicians only to deprive the people of being represented by their chosen representatives.

The court had, however, thrown the ball back to the then PPP government by directing it to take necessary action under the Constitution and law against former army chief, retired Gen Mirza Aslam Beg, and former director general of ISI, retired Lt Gen Asad Durrani, for their role in facilitating the group of politicians and political parties to ensure their success against their rivals in the 1990 elections.

On May 7, 2018, an SC bench had rejected Beg and Durrani's petitions to review the October 19, 2012 apex court verdict in the Asghar Khan case.