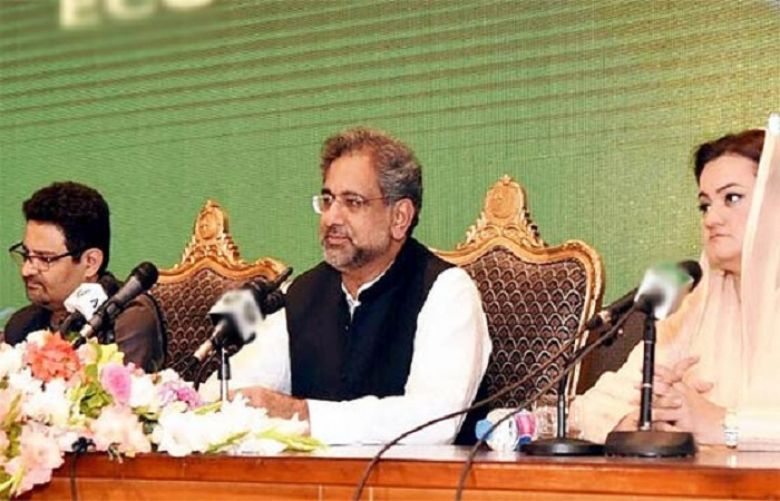 Pakistan Muslim League-Nawaz (PML-N) leaders on Saturday maintained that the ruling party has failed to perform in its first five months.

While lashing out at the government, Abbasi said that the country’s economy is facing serious threats as the record of loan receiving has been broken by the present government.

“The government does not possess any potential, ability or hard work. The ministers do not have understanding and can only level accusations,” he criticized.

A solution to gas crisis was told six months back and the matter is not that much difficult to resolve, added the former PM.

Abbasi stressed that Sui Southern’s Managing Director has no connection with gas crisis.

“The opposition parties are united in parliament and their agenda is to reveal the inability of the government. We do not want to abuse anyone but work for the betterment of the country,” he declared.

“The matter of ECL has been toyed. The government places name of those in ECL who they want to threaten however; the name of their allies are removed from the list,” alleged Abbasi.

“In our tenure, cabinet use to take decision in five minutes. Law of military courts was formed during our government. The government should explain the expansion in them. The decision will be taken by the parliament,” he emphasized.

Responding over the appointment of Justice Asif Saeed Khosa as new Chief Justice, Abbasi said that having expectation from judges is not accurate as their work is to provide justice to everyone.

Speaking over NRO issue, he said, “The authority to provide NRO resides with the dictator. The Prime Minister does not have any right to give NRO as per constitution. Nawaz Sharif attended 185 hearings. Such a person cannot ask for NRO,” he said.

Miftah Ismail also bashed the government saying that 2-8 percent loss was recorded during the first six months whereas the amount of loans has also magnified.

“The growth of economy has decreased and is heading towards negative,” he said. “The performance of private sector has also fallen. The exports did not witness an escalation in first five months,” criticized Miftah.

Second mini-budget is coming however; nothing significant has been done of the increasing dollar price, he added.

“No change has occurred in PM House as the UAE prince stayed there,” he maintained.