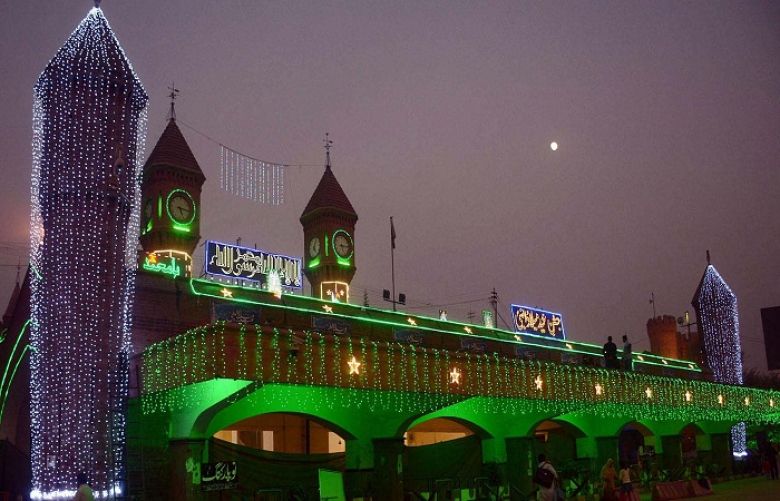 Eid Milad-un-Nabi (Peace Be Upon Him) is being celebrated today (Wednesday) with religious zeal and fervour in Pakistan and across the world.

The sacred day dawned with 31-gun salute in Islamabad and 21-gun salutes in all the provincial capitals to pay homage to the Holy Prophet Muhammad (PBUH). The federal government had announced public holiday in all educational institutes and government offices for the occasion.

Preparations and arrangements for celebrating “Eid Milad-Un-Nabi (PBUH)” on Rabi-ul-Awal 12, were in full swings across Pakistan. The mosques, buildings and homes have been decorated with colorful lights, flags and banners.

Vendors established a number of stalls at every nook and corner of the cities, offering banners, badges, stickers and flags inscribed with the slogans paying homage and reverence to the Holy Prophet (PBUH).

Special conferences, events and Mehafil-e-Naat are being held to express devotion with the last messenger (PBUH) whose entire life and teachings are beacon of light for the whole mankind.

To mark Eid Milad-un-Nabi (PBUH), mosques, buildings, markets, streets and homes have been decorated and illuminated with colourful lights and buntings.

People have also decorated their houses with colorful lights and green flags to show their immeasurable love with the Last Prophet (PBUH).

On the occasion, the Prime Minister directed the Higher Education Commission to set up special chairs on Seerat-Un-Nabi (SAWW) at three different universities ensuring a specific research on the life, character and teachings of the last Prophet Hazrat Muhammad (SAWW).

He said it would help educate and enlighten our new generation about the phenomenon as to how our Holy Prophet (PBUH) carved out the first ever Islamic welfare state of Madina Munawwara and how He transformed the characters of Arabs in a short span of time.

He said Pakistan will spearhead efforts to get passed an international convention on preventing defamation of religions. He added that nobody can be allowed to hurt the sentiments of billions of Muslims under the garb of freedom of speech.

Imran Khan said he will appoint an international law expert Ahmar Bilal Sufi as his special envoy to visit different countries to contact different experts and leaders to get the convention passed.

He said the Holy Prophet (PBUH) achieved this distinct target not through mobilizing resources but inculcating a spirit in His followers to serve the humanity with selflessness.

The Prime Minister regretted that some elements in the West and Europe are indulging in blasphemous acts time and again on the pretext freedom of expression provoking the Muslim Ummah across the globe.

He said when a chain of reaction comes in the Muslim world; the same Western and European nations dub the Muslims as terrorists and extremists through their propaganda machines.

The Prime Minister also urged the religious scholars and intellectuals to promote true teachings of Islam.