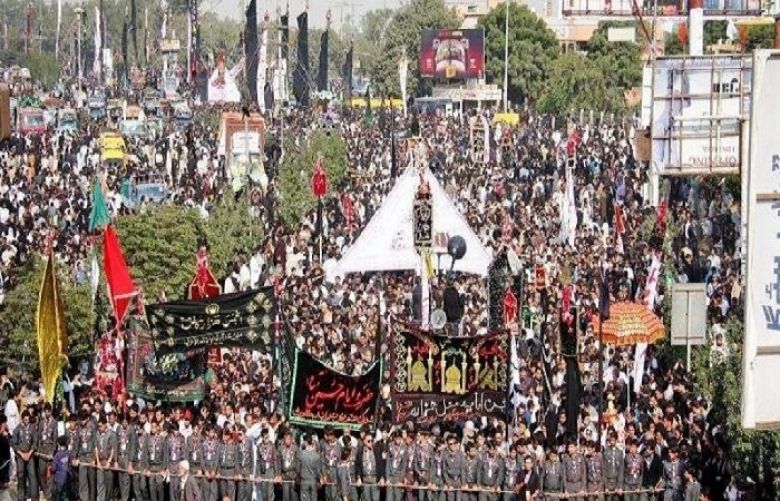 Ashura is being observed across the country with solemnity on Friday to pay homage to Imam Hussain and other martyrs of Karbala amid strict security to protect mourners from any terrorist incident.

Processions are being carried out in various cities as thousands of security personnel protect the mourners. Participants of the processions stopped for Zuhrain prayers while making their way through designated routes.

The procession routes are dotted with sabeel stalls, which are especially set up to provide cold drinks and milk to participants and the general public after they have walked long distances in the blazing sun.

Apart from the security measures, local administrations all over the country have placed hospitals and ambulance services on high alert. Moreover, the governments of the four provinces, AJK and Gilgit-Baltistan have taken adequate measures to ensure security on the day.

As there will be no Ashura procession in the federal capital, police and administration of Islamabad are cooperating with the Rawalpindi administration to carry out checks at all entry points between the twin cities.

Pillion-riding has been banned in many cities across the country. Citizens also facing partial suspension of cellular service in different cities due to security reasons.

Police have already conducted a survey of procession routes across the country and sealed all shops, houses and buildings on the routes after a thorough check by bomb disposal squads.

Security during Muharram has remained a matter of concern for over a decade because of a number of incidents of suicide attacks and sectarian violence.

Apart from police, Ran­gers and Frontier Corps personnel have been deployed in many cities on the routes of Ashura processions, while the army is also kept standby and can be called in case of an emergency.

The main procession in Rawalpindi emerged from Imambargah Ashiq Hussain. All roads along the procession route have been sealed.

Extraordinary security arrangements have been made in the city considering the past incident at Raja Bazaar as Ashura has coincided with a Friday.

In 2013, authorities had to impose a curfew in parts of Rawalpindi after sectarian clashes erupted during a Muharram 10 (on Friday) procession near Fawara Chowk, that left at least eight people dead and dozens injured.

The main procession in the city started from Nisar Haveli and It have concluded at Karbala Gamay Shah in the evening.

Nearly 10,000 security personnel have been deployed to protect mourners.

The main Ashura procession in the city started from Nishtar Park and is making its way to Hussainian Iranian Imambargah in Kharadar, where it have concluded.

The main procession in Peshawar emerged from Imambargah Agha Syed Ali Shah Rizvi and concluded peacefully after reaching its destination.

Strict security arrangements had been taken to avoid any untoward incident.

In Quetta, the main procession was taken out from Imambargah Nichari Alamdar Road. The procession have culminated at its destination after Maghrib prayers.

Additionally, over 30 smaller mourning processions were taken out amid tight security. Secret cameras have been installed in the city to monitor the procession route and a control room has also been established at the inspector general police's office. Aerial surveillance of the procession is also being also conducted by the administration.

Over 5,000 policemen and Frontier Corps personnel have been deployed to maintain the order in the city, while armed forces have been put on high alert to deal with any emergency situation.

Pakistan shut its borders with Afghanistan and Iran on the eve of Ashura.

Keeping imminent security threats in view, the Chaman Friendship Gate on the Pak-Afghan border will remain shut for a second consecutive day today. The FC have tightened security along the porous border to ensure peace in Balochistan during Ashura.

All movements and business activities have been suspended as result of the closure of the border and all traffic has also been suspended. Paramilitary troops are patrolling the border to maintain order.

Zero point at Taftan — on the Pak-Iran border — has also been closed because of Ashura. Security along the 900 km border has been tightened to avert any untoward incident.

FC and Levies personnel have been deployed at both borders to ensure peace.

In their separate messages to the nation on Ashura, President Arif Alvi and Prime Minister Imran Khan called for forging unity to fight terrorism and counter nefarious designs of enemies of the country, Radio Pakistan reported.

The president in his message said Ashura reminds us of the great sacrifices of martyrs of Karbala to uphold supremacy of truth and Islam. He said the martyrdom of Hazrat Imam Hussain (AS) teaches us that Muslims should not refrain from laying down their lives while fighting the elements of oppression and tyranny, according to Radio Pakistan.

PM Khan said the incident of Karbala teaches the lesson that one must be ready to offer sacrifice for the attainment of greater objectives. He said the Karbala incident is a historic battle between truth and falsehood, which is continuing even today, Radio Pakistan reported.

The PM said Hazrat Imam Hussain's (AS) immortal sacrifice is a fine example of steadfastness and persistence and a guiding principle for our lives.