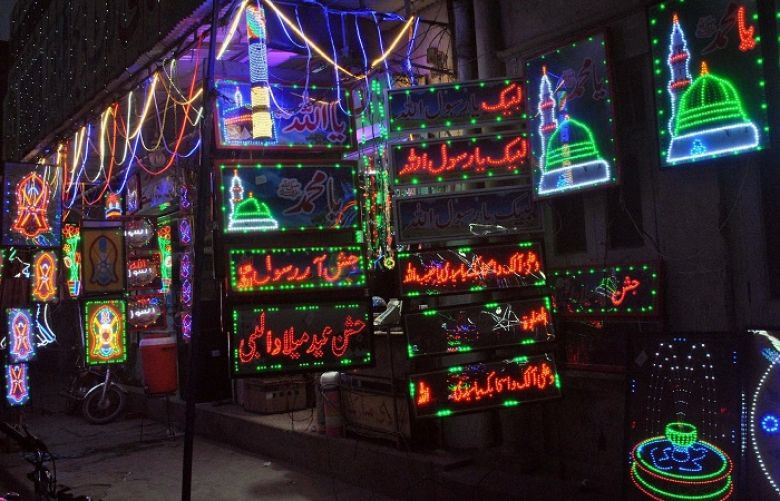 Eid Milad-un-Nabi — the birthday of Holy Prophet Muhammad (Peace Be Upon Him) — is being observed across the country with traditional religious zeal on Friday (today).

The day started with 31- and 21-gun salute in the federal and provincial capitals, respectively, following a night full of celebration, Mehfil-e-Naat, conferences, and fireworks.

The sacred day begins with offering of special prayers in mosques for upholding and flourishing of Islam and religious teachings, unity, solidarity, progress, and welfare of the Muslim ummah.

Numerous Eid Milad-un-Nabi (PBUH) processions will be taken out across the country and Mehfil-e-Milad will be held to celebrate the occasion.

All streets and roads, as well as bazaars, shopping centres, and government and private buildings, have been beautifully decorated and illuminated with lights, colours, and banners bearing the writings about the celebration of Eid Milad-un-Nabi (PBUH) across the country.

Gates have been erected at all major roads and streets in all small and major towns of the country in connection with Eid Milad-un-Nabi (PBUH) celebrations.

Private and public buildings have been illuminated with mesmerizing green and white lights on this occasion to express festivity.

Many vendors have set up colourful stalls with a unique collection of badges, stickers, flags, and banners inscribed with religious slogans to pay respect and reverence to the Holy Prophet (PBUH) across the country.

Federal and provincial governments have already prepared contingency security plans with coordination of other law enforcement agencies to guard the processions and other events to be held on the day.

Special checking of the route in Islamabad would be completed before the procession starts and bomb disposal squad would clear the route on the day.

More than 2,000 police personnel — including 300 traffic policemen — are performing security duties on the occasion in the federal capital, while special teams of Rangers, crime investigation department (CID), and the special branch police are assisting in the smooth performance of their duties.

The main procession in Islamabad will be taken out at Sector G-7 (Sitara Market) and culminate near the shrine of Hazrat Sakhi Mehmud at Aabpara Market.

The areas will be completely cordoned off via a heavy deployment of law enforcement personnel.

Strict monitoring of the main procession — through Close Circuit Television (CCTV) cameras installed recently — is part of the security plan. Parking vehicles on the route of the procession will be prohibited.

Police patrolling has also been enhanced in many areas.

The faithful would be checked with metal detectors and walk-through gates would be installed at the entry points of the processions.

The route of the main procession would be sealed completely and streets on the route would also be barricaded.

In Rawalpindi, as many as 3,500 policemen have been deployed in Rawalpindi district to ensure security for the processions of Eid Milad-un-Nabi (PBUH).

All the traffic would be diverted on other routes.

Congratulating the nation on the occasion of Eid Milad-un-Nabi (PBUH), Prime Minister Shahid Khaqan Abbasi urged the need for following the path of Holy Prophet Muhammad (PBUH) to create an environment of love, peace and harmony in the country.

“Our survival and our worldly and religious successes depend on completely following Uswa-e-Hasna,” the Prime Minister said in his message on the occasion of 12th Rabi-ul-Awwal, 1439. “Today we have to pledge that, by completely following Uswa-e-Hasna, we will create among ourselves the qualities of unity, mutual harmony, tolerance, and sense of responsibility, which are helpful in taking our country and nation forward on the path of development.”

“The best way to celebrate this blessed day is an affirmation from ourselves to prove before the world with our character, way of talking and acts that we are the Ummah of Hazrat Muhammad (PBUH).”

The Prime Minister said the last prophet Hazrat Muhammad (PBUH) came in this world as “Rehmat-ul-Aalameen” not only for Muslims but for the whole of mankind and the universe.

“By virtue of this, the day of 12th Rabi-ul-Awwal is the greatest day not only in the Islamic history but also for the whole universe and humanity,” he added.

Bilawal Bhutto Zardari — the chairman of Pakistan Peoples Party (PPP) — facilitated the nation on the auspicious occasion of Eid Milad-un-Nabi (PBUH) on Thursday.

He said he was dismayed that the celebrations this year are marred by the way some people resorted to violence weeks ahead of the holy day.

"The Holy Prophet Muhammad (PBUH) preached and practised tolerance, humility and understanding, not violence. He would have never approved violence even in his name.”

Nawaz Sharif — the former prime minister and president of Pakistan Muslim League-Nawaz (PML-N) — on the occasion of Eid Milad-un-Nabi (PBUH) said that youth should be introduced to the real teachings of the Holy Prophet (PBUH).

“We should protect the rights of minorities and discourage those who want to divide the nation,” the PML-N president said, adding that those spreading discord should be discouraged.

“Congratulations to the entire human race on the birth of a Holy Prophet (PBUH) – who rid the world of an era of barbarity and ignorance,” Shah said in a video message.

He further said that adopting the Holy Prophet’s (PBUH) teachings could save humanity from being destroyed.