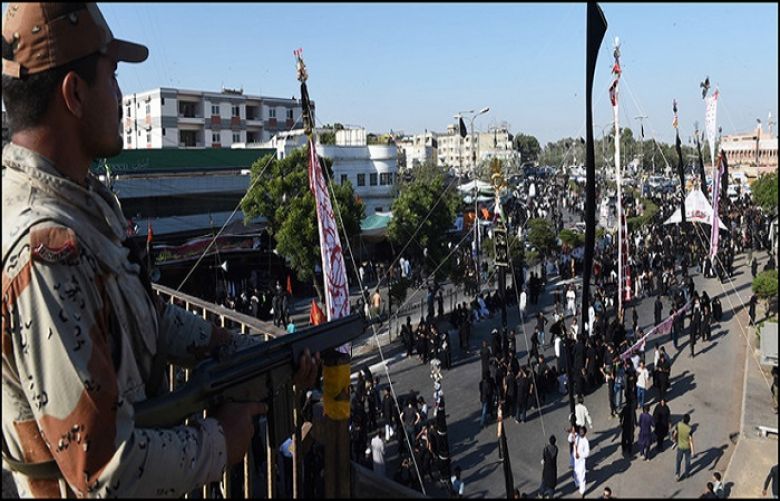 Security has been beefed up across the country for Muharram processions and congregations as thousands of mourners will gather in their respective cities for the annual processions on 8, 9, and 10th of first Islamic month, on Friday.

The major arterial route – M.A Jinnah Road – in Karachi has been sealed for commuters as containers were placed at various points along the road, besides heavy contingent of Rangers and Police have been deployed along the procession route.

The first major procession, eight Muharram, will be taken out today (Friday) from Numaish Chowrangi under stringent security measures. A large number of devotees clad in black, including men, women, children, and aged would attend the march that will pass through M.A Jinnah Road and conclude at Hussainia Irania in Kharadar.

A ban on pillion riding has been imposed in the city in view of the law and order situation.

Rangers and police have set up several points to check vehicles and passers-by on roads leading or linking to M A Jinnah Road. Traffic remained thin, while public transport also appeared in a very few numbers. The supply of grain and other essential items has also been halted because of major markets’ closure.

The Sindh home department has decided to suspend cell phone services in major cities of the province including capital Karachi, Hyderabad and Khairpur on 9th and 10th Muharram.

As per the Muharram contingency plan, Law Enforcement Agencies (LEAs) are ensuring strict security cover at over 1,520 Imambargahs, 12,700 Majalis, 4,150 mourning processions and 1,400 Tazia processions in the province.

Electronic and visual surveillance and use of sniffer dogs for explosives detection and sweeping of routes and venues will be carried out by Bomb Disposal Unit, especially at under-construction buildings, officials told media.

As many as 146,000 security personnel would be deployed across Punjab to ensure foolproof security whereas pillion riding would also be banned on 8th and 9th Muharram. Main mourning procession in Lahore would be taken out from Mori Gate.