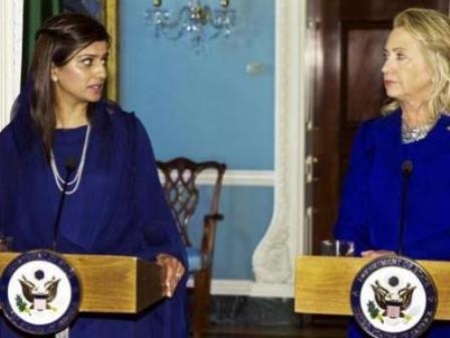 Foreign Minister Hina Rabbani Khar and US Secretary of State Hillary Clinton have discussed wide range of issues in Washington including counter-terrorism cooperation‚ economic and trade relations and efforts towards peace and stability in Afghanistan. Hillary Clinton reaffirmed Washington's support for Pakistan for combating terrorism. The US Secretary of State said they both have pledged to support a secure‚ stable and prosperous Afghanistan which is vital for the security of the region. Earlier speaking at the start of the meeting‚ the foreign minister said that on Saturday we stand to cease the trust-deficit mantra. She said relationship between the two countries should be based on mutual respect and understanding. The last eighteen months were difficult for many reasons but the two countries braved together as both of them have deep understanding of the importance of this relationship. The foreign minister said the two sides have done well towards building the trust. She said there is room for the two countries to enhance cooperation in energy and defence sectors. Hina Rabbani Khar dispelled the impression that Pakistan is doing US bidding. She said we pursue our own national interest while pursuing our counterterrorism goals and in pursuing a more stable and peaceful Afghanistan. The US Secretary of State expressed the confidence that the two countries can move forward together to reach their shared strategic objectives.