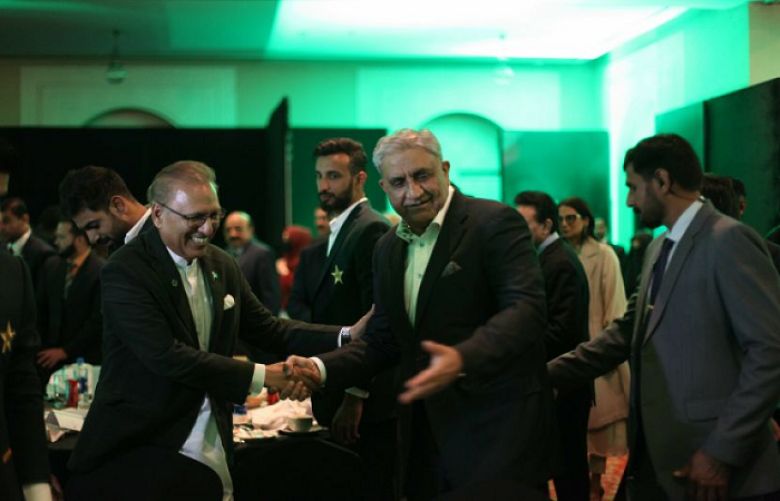 While meeting the national cricket team at the reception hosted by the Pakistan Cricket Board (PCB) Thursday, outgoing Chief of the Army Staff (COAS) Gen Qamar Javed Bajwa applauded the players' "fighting spirit" which he said lifted the nation.

President Dr Arif Alvi and the COAS met the T20 World Cup squad at a local hotel where the president said that the team had "lived up to its reputation as being unpredictable".

"They have made the country proud by beating the best teams on their way to the Word Cup final,” President Alvi said.

While the COAS said that he enjoyed openers Babar Azam and Mohammad Rizwan batting up front, he believed Shadab Khan was the best.

"I believe that there is no better T20 player than Shadab Khan who has every trick up his sleeves, required for a quality T20 player.”

Emphasising the significance of hard work and the need to follow discipline, the COAS commended the team, saying that they had "made the country proud by leaving the multi-billion dollar teams behind by reaching the final."

He added that the display of a fighting spirit was more important than "winning or losing", calling it the thing that "matters the most".

"Once you lose, you should have the courage to accept your defeat. The one who does not learn from his mistakes could not be called a true leader," he said.

The COAS, who is passionate about sports and played the Patron’s Trophy during his heydays told The News that he played as a wicketkeeper-batsman.

“Yes, I remember scoring a century in the Patron’s Trophy Grade II against PACO while playing as a wicketkeeper-batsman."

President of Pakistan Dr Arif Alvi and Chief of Army Staff General Qamar Javed Bajwa join us on the evening honouring the achievements of our cricket stars. pic.twitter.com/vkmBbYhuYT