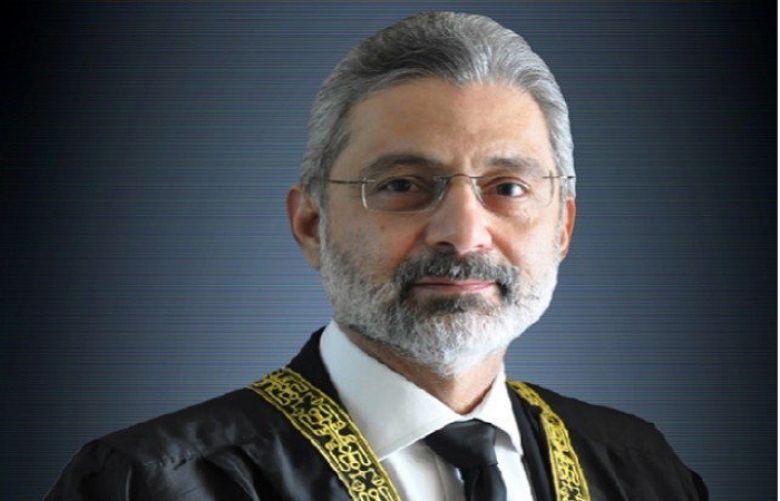 Senior puisne judge of the Supreme Court Justice Qazi Faez Isa said Saturday "it is not written anywhere that the Chief Justice of Pakistan (CJP) has the authority to appoint judges".

The remark came during Sindh High Court Bar Association’s annual dinner as Justice Isa expressed astonishment over the conduct of the then-federal law minister, Azam Nazeer Tarar, and Attorney-General of Pakistan Ashtar Ali Ausaf for deviating from their previous stance.

The justice, who was also a member of the Judicial Commission of Pakistan (JCP), said that the vote of a commission member is a trust that should be used without any fear or favour.

He said that he was astonished over the conduct of the former law minister and AGP for deviating from their previous stance, which they took in the judicial commission’s meeting on the elevation of high court judges to the Supreme Court.

He said that federal ministers used to take oaths under the Constitution, similar to judges, promising to carry out their duties without fear or favour. Still, now they vote in commission without providing any valid reasons.

The senior SC judge said that those who could not exercise their right to vote independently should resign, referring to the famous US politician’s quote that people who could not stand the heat of the kitchen should keep out of it.

He said that the bar should not request that any law minister, chief minister, or prime minister grant aid to them and be grateful to them. He was of the view that government funds used for the transportation of government officials should be utilised for improving the public transport system to resolve the transport problems.

Justice Isa went on to say that it had been just seven years since Pakistan came into being when its democratic system was attacked. The then-courts declared this attack on democracy unconstitutional, he added.

"The seed of unconstitutional decisions sowed then, had a negative impact on the country," Justice Isa said, adding that a prime minister was executed under an illegal decision in the past.

"The one who waved the fist started the politics of container."

He said that the lawyers’ movement was not meant for the protection of judges’ jobs but for the independence of the judiciary.

Justice Isa further stated that the lawyers of Balochistan also made great sacrifices for the judiciary.