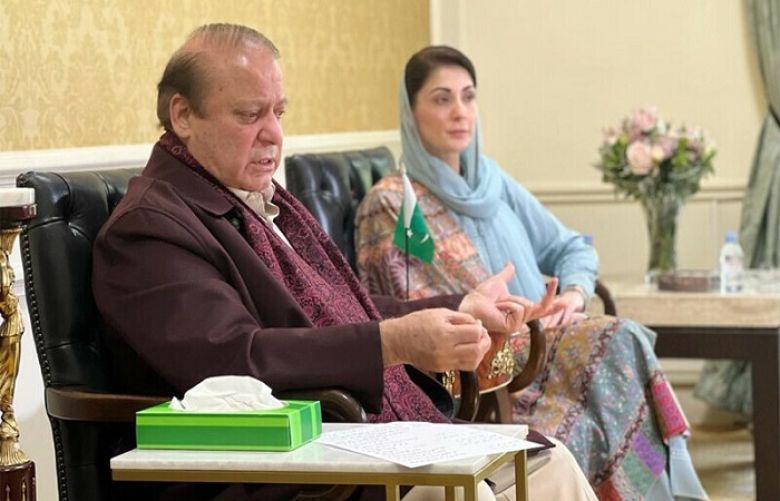 Nawaz is flanked by PML-N Vice President Maryam Nawaz — who has travelled to London after a three-year hiatus as she finally got her passport earlier this week on a court order.

"After her arrival, I am recalling all the undue criticism we faced when Kulsoom was in the hospital. People were trivialising the situation and claiming that maybe [Kulsoom's sickness] was all a drama," he said.

The PML-N supremo said that despite his wife's deteriorating health, the National Accountability Bureau's (NAB) judge announced his verdict — sentencing him to 10 years in jail and Maryam seven.

"Following the verdict, I urged Maryam that we should now go to Pakistan. Maryam told me that her mother's condition is deteriorating. But in response, I told her that there are some national responsibilities that we have to attend to," he said.

Nawaz said that he was convicted in a case in 2018 and the motive behind it was to foil PML-N's bid to come into power once again as the verdict came right when general elections were around the corner.

"When I was sent to jail, Maryam would often come to visit me. During one such visit, we were informed that NAB personnel were outside the Kot Lakhpat Jail and wanted to arrest Maryam," he said.

"They then arrested Maryam in front of me and her younger daughter. This arrest was made to hurt me. There was no other reason for it. They must've planned to arrest Maryam right in front of her father," Nawaz said.

Nawaz claimed that he had never seen anyone being arrested like that before. He asked who will be held accountable for these actions of the government functionaries.

The PML-N supremo said once, when he was presented before the court of judge Arshad Malik, he was informed that his wife — Kulsoom Nawaz's — health was once again deteriorating.

"I approached the jail superintendent and begged him to allow me to speak to my wife. After that, they took me to my cell and within three hours, they came to me and informed me that my wife had passed away," he said.

"Can you imagine what I must have gone through? The same people who refused to allow me to speak to my wife informed me about her death. However, I prohibited them from informing Maryam and asked them to allow me to inform her," he said.

“Maryam had no idea about it, so when I told her about that, she went into a state of shock and started crying uncontrollably,” he said, adding that he consoled his daughter with great difficulty. He said that both he and Maryam had to learn about the death of Kulsoom while they were in jail.

“They could have informed us 15 or 20 days before her death so we could be by her side and look after her. They could have thrown us in jail later afterwards. But they [deprived] us of this chance.”

Nawaz said that his wife's loss was irreparable, adding that people should not subject anyone to harsh treatment when it comes to politics.

Castigating PTI Chairman Imran Khan, Nawaz claimed that during the former prime minister's tenure, he has seen "acts that were never committed before".

Nawaz said that the acts of the "tyrants" are gradually being exposed, and in the coming days, more facts about them will come to the fore. "Each and everything that they have done is being exposed before the nation."

"He has taken a U-turn with regard to everything. He claimed that he would prefer dying by suicide instead of striking a deal with the IMF. The nation is still waiting for him to take his own life [as per his claims]," he said.

Nawaz then referenced the alleged audio clip of former chief justice Saqib Nisar, in which he can be purportedly heard telling another person that the PML-N supremo and Maryam would have to be punished to make space for Khan in politics.

"What more evidence do you want [...] We faced injustice repeatedly, but no judge took a suo motu notice of that. Judge Arshad Malik has accepted that he was pressurised into convicting me," he said.

Nawaz claimed that during his tenure, Pakistan was moving towards becoming a strong economy as terrorism was almost eliminated and the financial position of the country was also strengthening.

"I thought of Pakistan becoming a strong nation. They [PTI] claim 'absolutely not', well they did nothing. It was I who said 'absolutely not' when I was handed $5 billion on a platter," he said.

Despite the PML-N government completing its IMF programme, Imran Khan-led regime forced Pakistan to go back to the money lender and beg for loans.

"Everything — from daily use items to luxury — became expensive. We had ended loadshedding, but Imran restarted it. Imran also deteriorated Pakistan's relationship with other countries," Nawaz said.