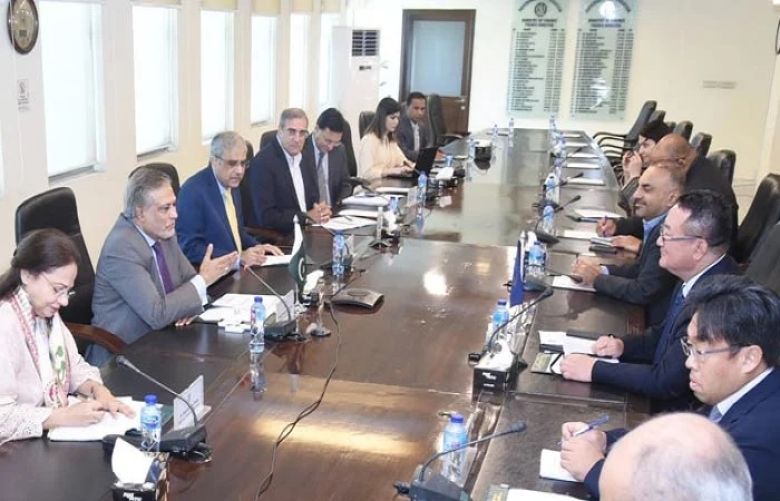 File photo ADB to provide flood-relief support of $2.3-$2.5b to Pakistan

The deluge has impacted 33 million people out of a population of 220 million, and caused damage the government estimates at $30 billion as crops, roads, livestock, bridges, houses, schools, and medical facilities were washed away.

The announcement came during Federal Minister for Finance and Revenue Senator Mohammad Ishaq Dar's meeting with a delegation of ADB, headed by its country director Yong Ye.

In a statement, the Finance Ministry said Dar welcomed the delegation and appreciated ADB’s role and support in promoting sustainable development in Pakistan.

He apprised the delegation of the devastation caused by the recent floods in the country and its impact on the economy of Pakistan and further stated that the economy faced huge challenges.

"The present government with its pragmatic policy decisions has not only arrested the decline but has also set the economy in the right direction," the finance minister said as he shared the priorities of the government.

While extending felicitations to Dar on assuming his role as the finance czar, Ye informed the minister that ADB will provide flood relief support to Pakistan to the tune of $ 2.3-$2.5 billion, including $ 1.5 billion for the BRACE programme, which will be placed before the ADB Board for approval during this month.

He also apprised the meeting about ongoing and future projects of ADB in different sectors — including social protection, food security and energy sectors.

Pakistan is out of money to spend on recovery from devastating floods, Climate Change Minister Sherry Rehman has said, urging prompt international help at the UN launch of an aid appeal as funds needed by the country were ramped up five-fold.

The United Nations revised up its humanitarian aid appeal for Pakistan five-fold to $816 million from $160 million, as a surge of water-borne diseases and fear of growing hunger pose new dangers after weeks of unprecedented flooding linked to climate warming.

The meeting was told that the UN has received only $90 million so far out of the $160-million previous appeal for aid.

"We have no space to give our economy a stimulus package, which would create jobs, and provide people with the sustainable incomes they need," Rehman told the conference in Geneva aimed at seeking aid for Pakistan.

Pakistan has already dispersed cash handouts worth $264 million to 2.47 million people affected by the disaster, she added.

The European Union (EU) scaled up its flood assistance to 30 million euros (6.7 billion Pakistani rupees), according to a statement after the EU commissioner for crises management, Janez Lenarčič, met Prime Minister Shehbaz Sharif in Islamabad.

Washington last Friday rolled over an agreement to suspend service payments on $132 million of Pakistan's debt, the US embassy in Islamabad said.

Islamabad also sought a rollover of $2 billion in Chinese deposits to its reserves, said a statement from Pakistan Finance Minister Ishaq Dar's office after his meeting with Chinese envoy Nong Rong.