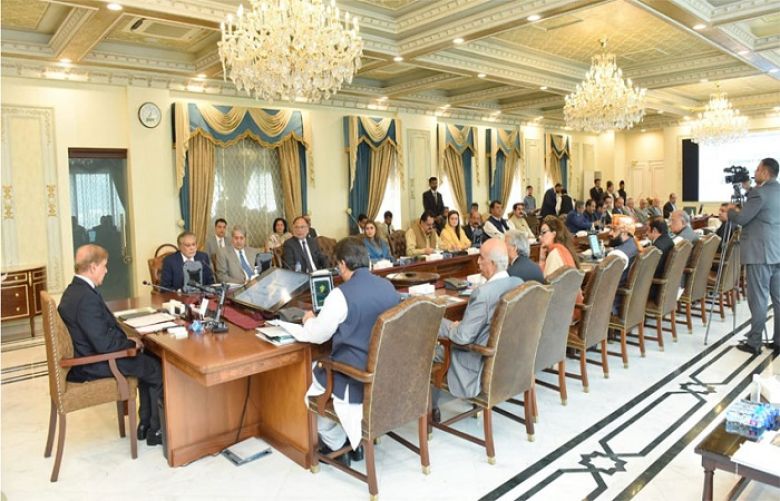 The Federal cabinet was on Friday informed that a copy of the diplomatic cypher carrying the details of the US’s purported threat to ex-premier Imran Khan’s government was “missing” from Prime Minister House records.

The cypher, based on then-envoy Asad Majeed’s meeting with State Department official Donald Lu, has been at the centre of PTI’s claim that the US conspired with elements within Pakistan to dislodge Imran from office.

A handout issued after a meeting of the cabinet declared that the “theft” of diplomatic cypher records is an “unforgivable crime” and violation of the Official Secrets Act, 1923.

After detailed deliberations, the cabinet formed a special committee which will determine the legal action to be taken against all those involved, including the ex-premier, ex-principal secretary to prime minister and senior ministers.

“The cabinet committee will consist of the representatives of the coalition parties in the government, along with ministers,” the handout added.

The cabinet was told that the act was an “unpardonable crime” against the state which was tantamount to prioritising political interests over key state interests.

The meeting participants were informed that the record of the receipt of the cypher was available with the relevant department, but the diplomatic cable was missing.

“According to the law, this document is the property of Prime Minister House,” the statement said.

With regard to the audios, the cabinet was told that the audios purportedly featuring Imran and his aides exposed “the criminal conspiracy of the former government”, while the cypher was given “fictitious meanings for political mileage and subsequently it was stolen after fraud, forgery, fabrication.”

The cabinet also strongly condemned the “harassment and intimidation” of Information Minister Marriyum Aurangzeb by the PTI workers in London. The meeting noted that there was no room for such a behaviour in Islam or even in Western civilisation.

The members appreciated “exemplary patience and bravery” shown by the minister.

The controversy surrounding the no-confidence motion against the former premier Imran Khan took a dramatic turn when the embattled PM brandished a letter at a rally on March 27 — days before his ouster — claiming it contained evidence of a “foreign conspiracy” hatched to topple his government.

Imran had kept mum about the contents of the letter when he first unveiled it but he spilled the beans days later by naming the United States when the exit of his government appeared imminent.

Imran’s allegation that the US spearheaded his exit from power was based on a cypher received from Pakistan’s Ambassador to the US, Asad Majeed, in which the envoy had reported about a meeting with Assistant Secretary of State for South and Central Asia Affairs Donald Lu.

Majeed had reportedly said that Donald Lu warned that Imran Khan’s continuation in office, who was set to face a vote of no confidence, would have repercussions on bilateral relations.

The US was said to be annoyed with Imran over his “independent foreign policy” and visit to Moscow.

The Pentagon and the State Department have repeatedly rejected the accusations, saying there was no veracity to it.

The National Security Committee (NSC), which includes all services chiefs as well as the head of Pakistan’s top intelligence agency, took up the matter on March 31 with then premier Imran Khan in the chair. The forum decided to issue a “strong demarche” to a country that it did not name over what it termed as “blatant interference in the internal affairs of Pakistan”.

It had also termed the interference “unacceptable under any circumstances” and said the language used in the communique was undiplomatic.

While the forum had stopped short of calling the interference a conspiracy at the time, another meeting of the NSC was held on April 22 with newly elected premier Shehbaz Sharif in the chair, and which included the same military chiefs who attended the March 31 session.

During its second meeting, the NSC statement said it “reaffirmed the decisions of the last NSC meeting” and explicitly went on to add that it found no evidence of a foreign conspiracy.